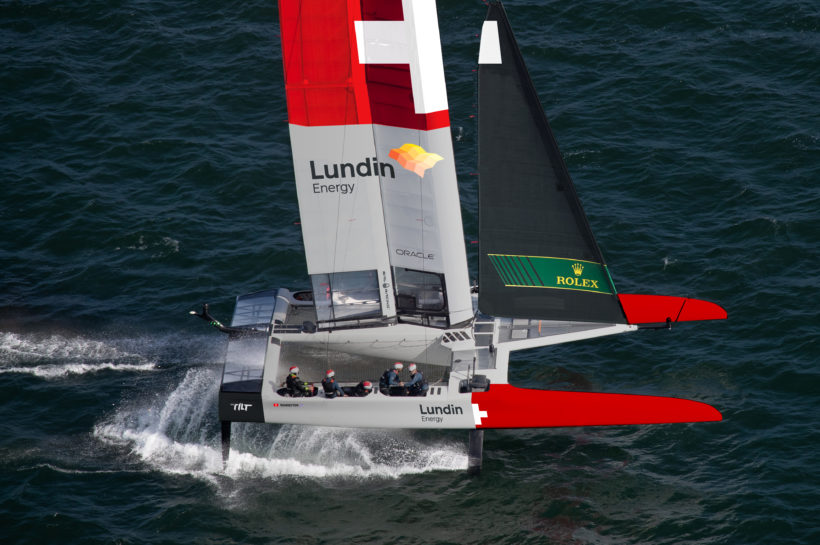 A young and ambitious Swiss team, led by Olympic sailor Sébastien Schneiter from Geneva, will compete next season in SailGP – the world’s most exciting racing on-water, featuring the sport’s best athletes.

Geneva, 6th September 2021 – The new Switzerland SailGP Team was presented this morning in Geneva. Led by Sébastien Schneiter, just back from the Tokyo Olympics, the latest team to join the global sport’s league is a young and ambitious Swiss team that will carry the colours of its partner Lundin Energy around the world during the next three years.

“This is a major new chapter for Swiss sailing,” says Schneiter. “Our goal is to create a competitive team with the best Swiss sailors. We have to learn at first but our aim is to sail at the front and compete with the best.”

Established in 2018 and now in its second season, SailGP is an annual, global sports championship featuring bold, cutting-edge technology and awe-inspiring athleticism. Powered by nature and driven by purpose, the fan-centric, inshore racing takes place in some of the most iconic harbours around the globe and culminates with a $1 million winner-takes-all match race at the end of the season.

SailGP CEO Sir Russell Coutts said: “We are very pleased to welcome Sébastien and the Swiss team to SailGP – a new expansion franchise for the league. This is a really exciting moment for SailGP as it takes us another step closer to grow the league to ten teams and twelve events, providing a consistent annual championship for the world’s top professional sailors. We look forward to watching Sébastien and his team progress in the league and I am confident they will quickly get up to speed and be competitive alongside the best in the world.”

The Switzerland SailGP Team has been born from Team Tilt, a structure founded in 2012 that provides support to young Swiss sailors. The team has shown its level of ambition since its inception, winning the Bol d’Or Mirabaud and the D35 Trophy in 2015 and finishing second in the GC32 Racing Tour in 2016. Team Tilt represented Switzerland in both editions of the Red Bull Youth America’s Cup, in 2013 (4th) and 2017 (3rd). The team went on to win the GC32 world championship title in 2018 and was runner-up in 2019. It was voted best Swiss sailing team 2019.

In parallel, Sébastien Schneiter, alongside Lucien Cujean, competed at the Olympic Games in Rio de Janeiro and more recently in Tokyo in the very demanding 49ers class against several of their future opponents.

The Swiss team’s crew will mainly comprise of young Swiss sailing talent and be managed by experienced international sailors Tanguy Cariou. Swiss Finn champion Nils Theuninck and Arthur Cevey also join the team, which is set to grow rapidly over the coming weeks.

“We chose SailGP because it is the world’s best organised and most efficient professional championship,” said Cariou. “The boats are high performance one-designs, where the sailors make the difference. The management of the league, its marketing and promotion are also excellent, and constitute an essential asset for the teams and their partners. Finally, SailGP’s sustainable approach, which aims to minimise its impact on the environment with concrete actions, also fits with our philosophy in this respect.”

Lundin Energy, the team’s main partner, is delighted to be associated with an international sporting project, whose values it shares and with whom it shares a  target to achieve carbon neutrality by 2025 at the latest. “We perform in a highly competitive environment and promote a culture of responsible innovation and excellence.” said Nick Walker, President and CEO of Lundin Energy. “We look forward to supporting this ambitious and  spectacular project.“

The Swiss SailGP Team will compete in the next three seasons of the SailGP league starting with Season 3 in May 2022 and has already begun its introduction to the league, attending events in Season 2 as observers. The team’s aim is to get up to speed with the class in the first season and get used to the new boat, before competing against the best SailGP teams and clearly aiming for top performances.

Sébastien Schneiter
Sébastien Schneiter, 26 (born 24 September 1995), is the skipper of Switzerland SailGP Team. He has received numerous awards in his junior career, winning several national titles, but also a European title and medals at world level. Sailing in the Olympic 49ers class, where he quickly reached the world’s top 10, Sébastien also led Team TILT on different projects, such as the D35, the GC32 circuit or the Youth America’s Cup. Some very good results were obtained, including a victory in the D35 Trophy, a 3rd position in the Red Bull Youth America’s Cup and a GC32 World Champion title. Sébastien represented Switzerland at the Olympic Games in Rio in 2016 and Tokyo in 2021.

Lundin Energy
Lundin Energy is an experienced Nordic oil and gas company that explores for, develops and produces resources economically, efficiently and responsibly. We focus on value creation for our shareholders and wider stakeholders through three strategic pillars: Resilience, Sustainability and Growth. Our high quality, low cost assets mean we are resilient to oil price volatility, and our organic growth strategy, combined with our sustainable approach and commitment to decarbonisation, firmly establishes our leadership role in a lower carbon energy future. (Nasdaq Stockholm: LUNE). For more information, please visit us at www.lundin-energy.com or download our App www.myirapp.com/lundin