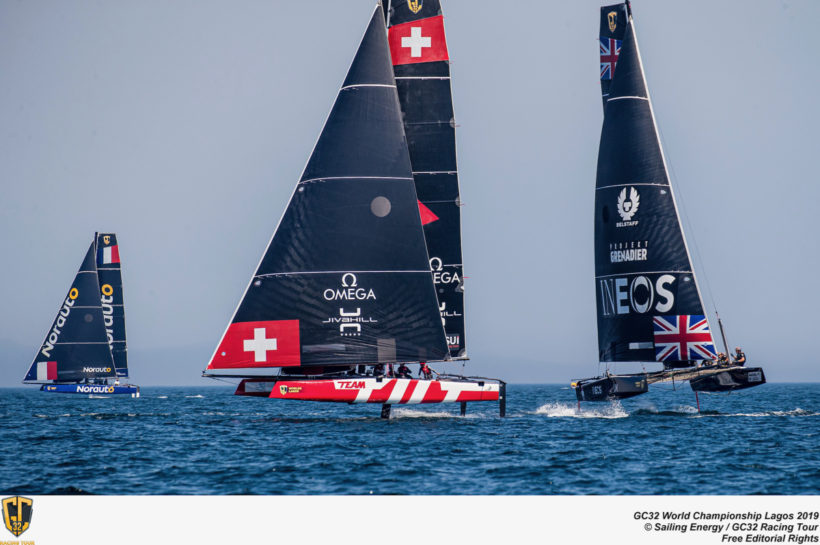 Team Tilt claimed second place at the GC32 World Championships this weekend after a superb performance against some of the best teams in the world. The young team hadn’t sailed their foiling catamaran since they won the championships themselves in 2018. Alinghi (Arnaud Psarofaghis) claimed the title with Ineos Team UK (Ben Ainslie) completing the podium in third place.

Throughout 18 races in ideal foiling conditions, Sebastien Schneiter, Lucien Cujean, Jeremy Bachelin, Nils Theuninck and Glenn Ashby held their own against the nine other teams. Lying seventh at the end of day #1 on Thursday, the crew quickly found their feet on the GC32 catamaran and worked their way up the ranks over the next three days of racing. While Alinghi quickly took the lead overall, Team Tilt, representing Omega and Jiva Hill Resort, battled for second place right up until the last round, fighting off Ineos Team UK, Norauto (Franck Cammas) and Team Oman Air (Adam Minoprio) for the prize.

With a 3rd place at the Red Bull Youth America’s Cup in 2017 and the GC32 World Championship title in 2018, Team Tilt’s latest result is a welcome addition to their palmares!

Sebastien Schneiter, Lucien Cujean and Nils Theuninck will now return to Japan to join the Swiss Sailing Team and resume their Olympic preparations.

“We got stronger throughout the week, we were clearly lacking training hours on the water, but we learned a lot on day #1 and that showed in our results on day #2. Finishing second at the World Championships with no training really shows the potential of the team!” said skipper, Sebastien Schneiter.

“I’d like to congratulate Alinghi on an excellent week and I’m really happy the title will be staying in Switzerland for another year!”

Glenn Ashby, mainsail trimmer, added: “It was a great week of racing. The conditions were ideal, I loved sailing again with the boys. Hard to have a better week than this one in terms of competition! Compared to our amount of training, I am really satisfied with our result.”

And his sentiments were echoed by foil trimmer, Jeremy Bachelin: “Having been apart for a year, it was wonderful to be sailing with everyone again onboard the GC32. Glenn brought a lot to the team; we all know each other so well after such a long time!”