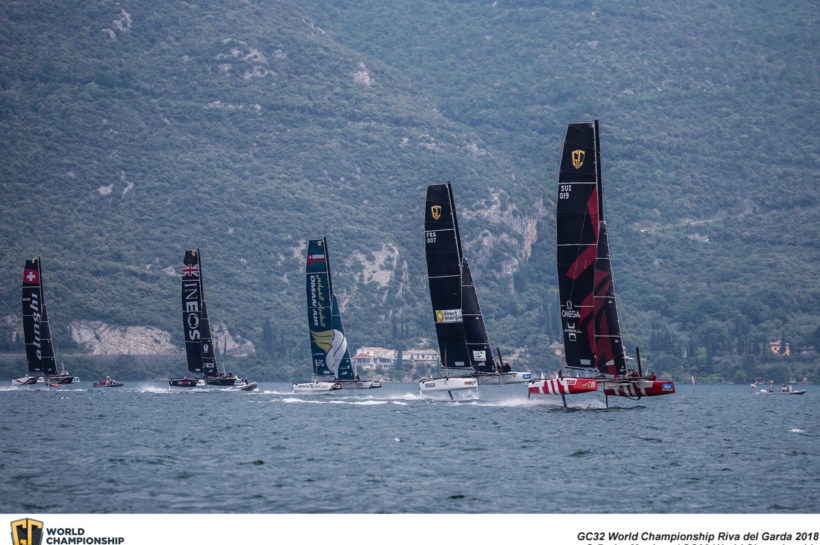 The GC32 foiling catamaran World Championships kick off this week in Lagos, Portugal, and current reigning champion, Team Tilt, are preparing to defend their title against what promises to be a strong fleet of battle-hardened teams.

The team of young Swiss sailors do not compete on the year-long GC32 Racing Tour alongside the nine other teams, so have inevitably had less training. Having said that however, the world champion has been training on the race course in Lagos since the 17 June, so will have a good handle on the conditions and the boat.

The sailors know each other well – almost all of them sailed together last year in Riva del Garda, Italy, for the World Championships. Sébastien Schneiter, Lucien Cujean and Nils Theuninck are currently preparing for the Olympic Games, while Jérémy Bachelin was onboard Team Tilt for the last two Red Bull Youth America’s Cup events. Australian skipper of Emirates Team New Zealand, Glenn Ashby, completes the roster, bringing his legendary experience to bear.

With several good days of training behind them, the team is now ready for the competition which starts on Thursday and runs through to Sunday with up to five races a day.

Sébastien Schneiter, skipper: “We have refamiliarised ourselves with the boat and everything is working well onboard. We need to keep training in order to be the best we can be by the time racing begins on Thursday. We’re really enjoying sailing together again, pulling off foiling gybes and training on this beautiful stretch of water. The wind is quite strong, but it will be a more tactical race than in Riva del Garda. The conditions are variable and there will be plenty of opportunities! We are all quite strong tactically as we’re all off sailing our own programmes, so hopefully that will stand us in good stead. It is hard to measure ourselves against the other teams ahead of the racing, they all raced the opening stage of the GC32 Racing Tour so the level will be higher than at last year’s World Championships, that much is clear!”

Glenn Ashby: “It’s nice to join Team Tilt for the World Championships and once again be part of their great young group of talented yachtsman. Our ambition as a group is the same as last year: to perform the best we can, to ultimately race ourselves for satisfaction knowing we have pushed hard to achieve the best possible outcome. We are not going into this regatta as defenders, but as challengers! The level of all the competing teams here is very high and we have full respect of all them. Fortunately with the shifting sands of an America’s Cup program, the stars aligned at the last minute, allowing a window of opportunity to be able to come and do this event with Team Tilt. I am very happy once again in being able to be part of the ongoing relationship with Team Tilt and Emirates Team New Zealand!”