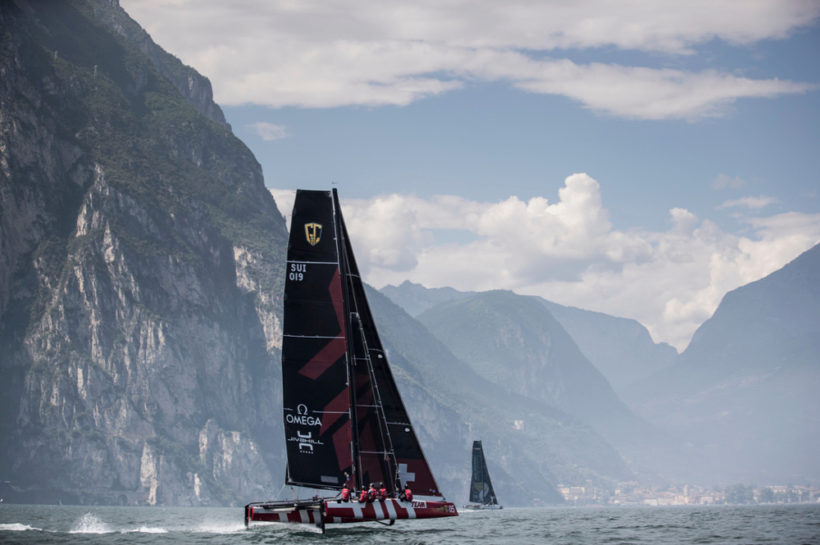 Winner of the first GC32 World Championships last year in Riva del Garda, Team Tilt defends its title this summer. At the end of June, the World Championship of flying catamarans will be held in Lagos, Portugal. A racing area that should be windswept, offering a beautiful show for the ten teams that have been confirmed!

As world champion, Team Tilt returns without pressure. The team has not sailed its GC32 since the 2018 World Championships. It will clearly therefore, have less practice than its competitors. Following the same schedule as last year, the crew will do a training block on site, just before the regatta. It will, again, proudly wear the colours of its two main partners, Omega and the Jiva Hill Resort.

Sébastien Schneiter, skipper: “We are back in the same vein as last year. We know the boat well and the same goes for the team, but our preparation has shifted in comparison to the other teams in the Racing Tour, so it’s difficult to position ourselves in terms of objectives. When you take part in a regatta, you aim to win. But those who have been sailing for a year do not want us to beat them again. If we manage to be efficient in the training phase, we have hopes of achieving a good result! However, if the weather conditions or a breakdown were to prevent navigations during those days, that would make the preparation far more complicated. Jimmy Lebaut will be there to ensure that the boat is technically ready, and to repair any damage that may occur, as soon as possible. These 10 days will define our final result! Last year everything fell into line and worked well, and the result followed. But it is a race area we do not know, Lagos should be quite windy, with good Portuguese thermal trade winds at this time.”

Maud Jayet proudly wore Team Tilt’s colours at the Genoa World Cup (ITA) late April. First medal for the sailor of the Nautical Society of Geneva, in the highly contested class of the Laser Radial.

“It was a beautiful Medal Race, but I was nervous because I was penalized, and the pressure remained at its peak until the finish line. But finally, I’m very happy with bronze!” Maud now trains with Thomas Piesker and Nathalie Brugger when racing some regattas. The former Olympic sailor brings all her knowledge to the talented Maud!

Results of the World Cup

A few weeks later, Maud achieved the criterion of TOP 10 in the European Championship of Laser Radial in Porto (POR), thus confirming her qualification in level A in 2020.

Eleventh at the 49er Europeans in Weymouth (UK) in early May, Schneiter/Cujean finished eighth European team, thus meeting the criteria to integrate the A level of the Swiss Sailing Team next year. “This is the first time that so many rounds have been played, it was a great week,” says Sébastien.

“The rankings are right, we could have done 40 races, and yet the rankings wouldn’t have changed much! We were consistent, between the 8th and 15th place. It’s a shame to have missed the Medal Race by two points but eventually it didn’t take place. Our goal of selection for the national team is achieved, we can now focus on the selection for the Olympics. We have demonstrated some very good things, especially in Gold Fleet, where the level is the highest. The lesson of this regatta: we may have been a little too conservative at first, in order to avoid making mistakes that would have led us to Silver Fleet. Next time we will attack more right from the beginning! We are very happy to see that we can sail in front, under conditions that are not usually our best.”

Loyal reporter of Team Tilt, Christophe Margot accompanied Sébastien and Lucien to Weymouth during the 49er Europeans. The video of the event can be seen here.

Nils Theuninck close to the quota for Tokyo

While Maud Jayet, Sébastien Schneiter and Lucien Cujean had already qualified Switzerland for Tokyo in their respective classes, the third Team Tilt boat was close to qualification. During the Europeans of the class, mid-May in Athens, Nils Theuninck was to finish 4th nation not yet qualified. Eleventh after the last round, the goal was reached. That was not taking into account a protest against him, for a penalty turn carried out too long after the fault. Nils was disqualified from the last round and fell from the 11th to the 29th place. Team Tilt wishes to congratulate him on his excellent results in recent weeks; the whole team is convinced that he will seize every opportunity to progress and become even stronger for the purpose of 2020 summer!

A new trainer for the 49er

One of the best coaches in the world joined the project a few weeks ago. Jim Maloney has been working with Sébastien and Lucien since the Trofeo Princesa Sofia and will continue up to the 2020 Games. The 60-year-old New Zealand coach lives in Auckland but grew up in California. He brings to the team a new dynamic, which is paying off!

Discover his interview on the Swiss Sailing Team website.

The team is very proud to be able to rely on a new partner: Bucher + Walt joins the project! The store, a retailer of many brands, is one of the key players in sailing equipment. We thank them for their trust!