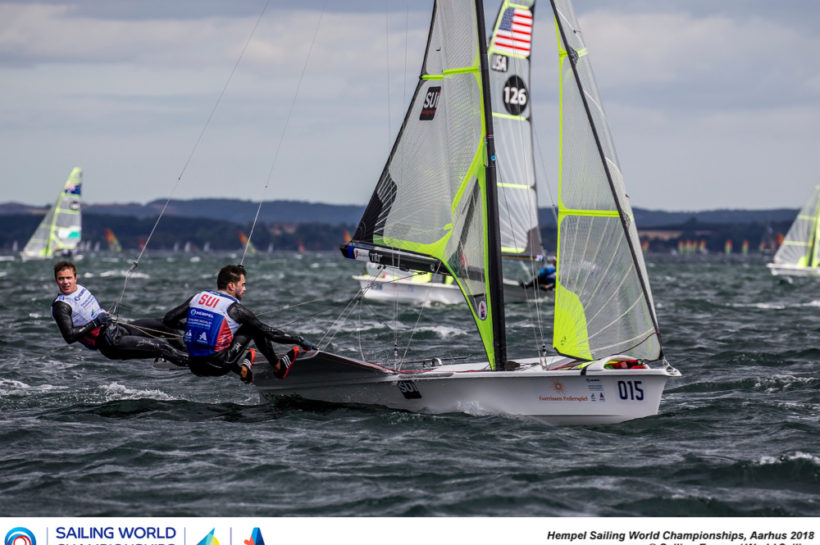 Since August 2, the world’s best sailors are in Aarhus for the Hempel World Championship, joining all the Olympic Classes Worlds Championship. Over 1’400 athlètes representing 85 countries have two targets : perform at their world championship and select their country for the Olympic games.

In the 49er class, the TOP 8 nations will have the entry ticket for Tokyo at the end of the event. Sébastien Schneiter and Lucien Cujean have had two very good first days so far, and are standing in 4th overall after 5 races (signing four races in the top 10!) It’s too early to count points though, with 9 races to go…

They started racing on Saturday August 4, with a light and shifty sea breeze. Solid start with 3, 8, 2 on day 1. “We sailed just like we did during our long training weeks here”, said Lucien. “We had a good speed and played well with the wind shifts. We really like these conditions. The good point is that we didn’t have a bad race yet…”

On day 2, the breeze built up to18 knots, with still lots of wave in Aarhus. “We were racing on Stadium race course, close to the shore”, tells Sébastien. “We had only two races scheduled. We did a good first one, but the second one was a bit crazy ! We managed staying in the game, we like this strong wind. It was very important to handle well the boat today…”