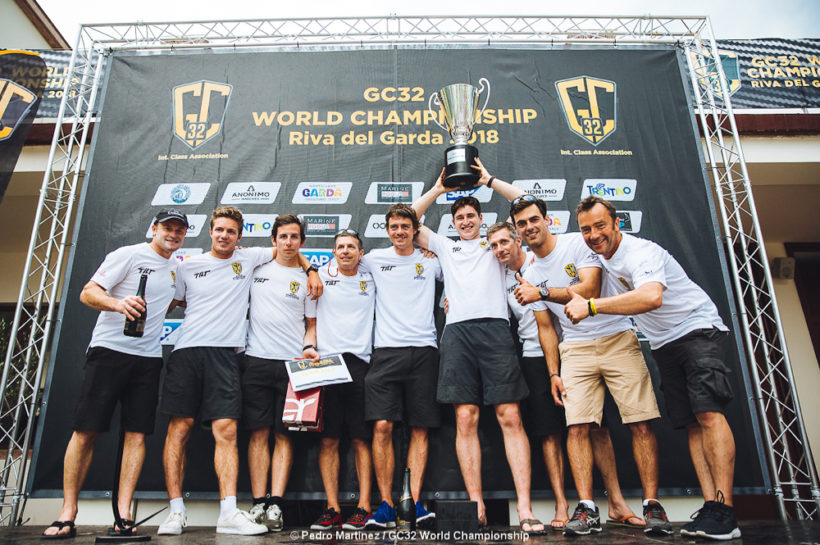 Team Tilt enters world sailing history as the winner of the first ever GC32 World Championships. The foiling catamaran, helmed by Sébastien Schneiter with Glenn Ashby on mainsail trim raced to the top step of the podium against some of the best crews in the world in Riva del Garde. SAP Extreme Sailing Team and Team Oman Air completed the podium in a fleet of thirteen GC32s from the Extreme Sailing Series and GC32 Racing Tour events. An extraordinary performance by Team Tilt against a world class fleet! After a challenging first day, Team Tilt regrouped and finished in the top 4 for the remainder of the event, but their victory came down to the wire on Sunday.

Bryan Mettraux: “I am proud to have won and with such a great team. There was excellent team spirit on board, I had a lot of fun sailing on Team Tilt again and seeing the progress of the younger sailors.”

Nils Theuninck: “The most important moment was to win the first race on the Friday, that gave us confidence and we managed to hang on to that confidence all the way to the end! Winning the world title made us even stronger as a team.”

Tanguy Cariou: “The key to the team’s success was the training week we had before the event. We worked together towards a common goal and stayed calm during the regatta. This world championship really validates the hard work that Team Tilt has invested over the years.”

Jérémy Bachelin: “Since the Youth America’s Cup in San Francisco, we have all been doing different things and it was great to be able to sail together again. It was a fantastic team effort that we could bounce back after the initial challenges!”

The GC32 Worlds in video

Relive the highlights from Riva del Garde where our favourite reporter, Christophe Margot, was shooting events as they unfolded.

Summary of the worlds

49er: update on Sébastien and Lucien’s season so far 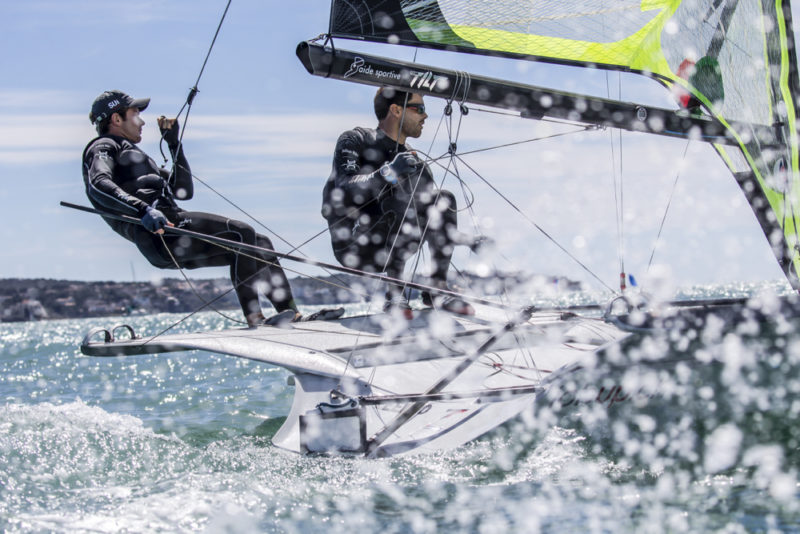 Glowing in their recent success at the GC32 World Championships, Sébastien Schneiter and Lucien Cujean are now back on board their 49er and fully focussed on trying to qualify the nation in the 49er class for the Tokyo Olympic Games in 2020.

We believe in this 100% and we are doing everything to achieve our goal,” said Sébastien. “If we continue to sail as we were at the start of the season, then we will qualify. At Aarhus, the conditions are very variable, and the sea tends to be quite flat – these conditions suit us usually.” Sébastien and Lucien qualified for the medal race at the first two World Cups of the season, in Miami and Palma, and are on track to achieve their objective, proving once again that they are able to excel amongst the world’s elite. “The key to success is to plan a season of training and regattas and to be on top of our game at the right time,” said Lucien. “Unfortunately, that was not the case at the Hyeres World Cup and we learnt some valuable lessons from the experience. When we are in the development phase, it is really important for us to identify the elements that will allow us to grow.”

The World Championship win at the GC32s has given the team a boost and the two friends have taken that extra energy and focus back to the 49er. “We always have a lot of fun,” said Sébastien. “The better we get, the better our results and the happier we are!” Lucien added that there are always some challenging times out on the water. “People don’t see them as they are our own challenges or difficulties, but that’s normal, this is a long-term project that is gradually becoming more and more fruitful and rewarding.”

Nils Theuninck is in great shape on his Finn 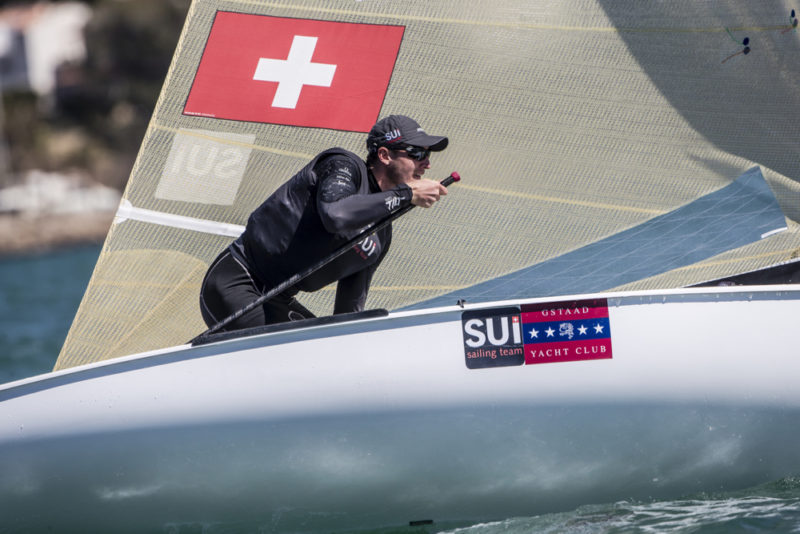 Team Tilt is well represented across the Olympic Classes. Aside from the 49er, the squad has Maud Jayet competing on the Laser (she finished 6th at the World Cup finals in Marseille and Nils Theuninck in the Finn class. Nils was recently crowned the Under 23 European Champion this spring. Considering Nils transitioned from the Laser Standard to the Finn just a year ago, a 12th overall and an 8th European is an impressive result. “My first international Finn regatta was last year, so I am happy with my progress,” he said. Both athletes are aiming to qualify Switzerland in their respective classes at the Aarhus World Championships in August for the Tokyo Games. 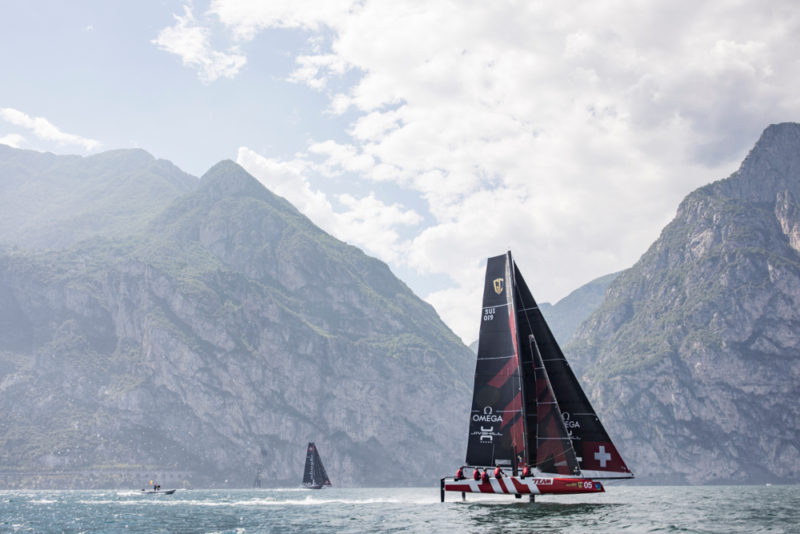 Passion, talent, motivation, training and teamwork, these are some key elements of Team Tilt’s success. But it is impossible to talk about success without mentioning the Team Tilt partners without whom this project would not have reached the heights that it has. Alex Schneiter, team head, has involved partners that are faithful and engaged, this includes the technical partners of course, but also our two main partners, Omega and the Jiva Hill Resort.

The hotel, situated at the gate to Geneva, has been a supporter since the 2013 Red Bull Youth America’s Cup – they have been a part of the project as it has developed. The partnership is driven by Ian Lundin who has become as much a fan as a sponsor and who sailed with Team Tilt in Riva del Garda just a few days before they won the title. Omega invited 20 lucky guests to experience the World Championships in Italy at the heart of the team. They sailed, they debriefed with the sailors and followed the racing tack by tack. An unforgettable experience.

Jimmy Lebaut: service with a smile 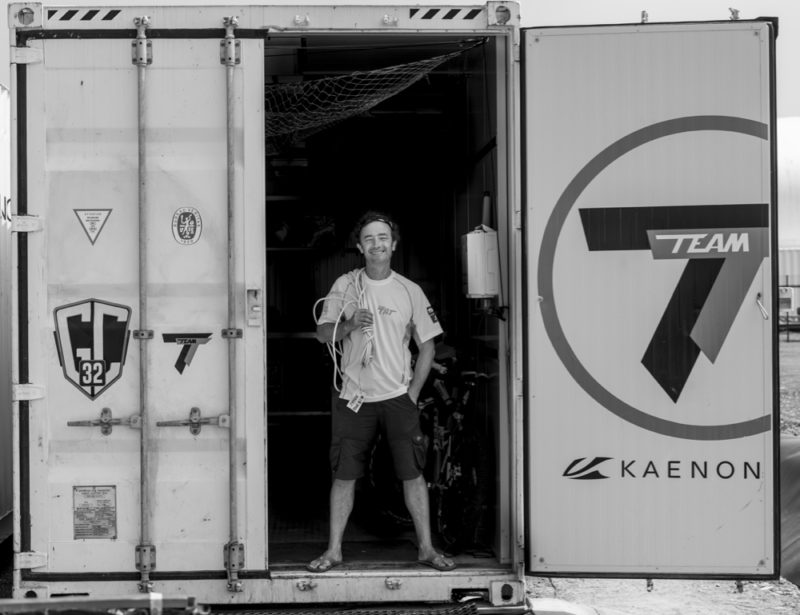 We would like to end this newsletter with warm thanks to our favourite shore crew manager. The Breton joined the team as it was preparing for the Red Bull Youth America’s Cup 2017 and was on hand again in Riva del Garda, smiling and caring for the sailing boat (and the sailors!). Jimmy has played a big part in Team Tilt’s success. “It is a real satisfaction for the whole team,” he said. “There were no equipment failures on the boat during the championship, that is a source of pride for me.” We wish him success in his other projects with the Diam 24 La Boulangere, on the GC32 Racing Tour with .film Racing and with Banque Populaire on the Ultime circuit. Thank you ‘beautiful’!