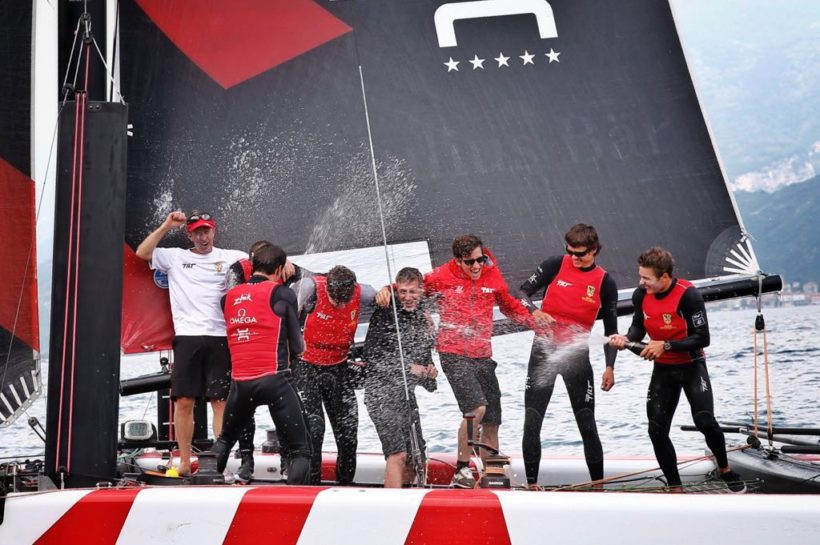 The inaugural GC32 World Championships on Lake Garda saw 13 teams from the GC32 Racing Tour and the Extreme Sailing Series gather for a four day show down from the 23-27 May. The world’s sailing elite were out in force with sailors from the America’s Cup rubbing shoulders with champions from both tours.

But Team Tilt was not intimidated… After a complicated first day and an 11th place overall, the Swiss team, led by Sébastien Schneiter, refocused and came out of the blocks strong on days two and three with consistent performances putting them in the top 4. Going into the final day, they were just two points ahead of SAP (Adam Minoprio) prompting Glenn Ashby, the skipper of Emirates Team New Zealand, who was sailing with Team Tilt, to joke that ‘the regatta only started on Sunday!’. This morning, the fleet was called out early to race in the morning northerlies. The Swiss team posted a third place putting them second overall tied with SAP. During the afternoon racing, they had nothing to lose, held nothing back and it paid off. They ended the day eight points ahead of SAP after 16 races. Oman Air (Phil Robertson) completed the podium in third and the two other Swiss teams, Alinghi and Realteam finished fourth and eighth respectively.

The team’s performance is all the more remarkable considering this is the first regatta with this crew composition. Ashby sailed with the team in 2016, but some of the team members were rotated in for the Worlds and considering they were up against teams from the Extreme Sailing Series and GC32 Racing Tour that have sailed together for years, Sébastien Schneiter, Glenn Ashby, Lucien Cujean, Nils Theuninck and Bryan Mettraux can give themselves a pat on the back!

Up next, if the forecast is for high winds, the team will race the GC32 at the Bol d’Or Mirabaud Swiss season classic, otherwise the main focus of the year remains the 49er Olympic campaign, in fact Sébastien Schneiter and Lucien Cujean fly to Aarhus, Denmark, next week to train for the Sailing World Championships.

Quotes from the sailors:

Sébastien Schneiter: “It hasn’t quite sunk in yet! It’s amazing to have won the World Championships and to have finished in front of such prestigious teams! I’m happy to have experienced this alongside such a great team: a bunch of friends accompanied by Glenn Ashby. We share one of Glenn’s many world titles now and are very proud of that! We fought all the way to the finish with SAP, we gave it everything we had to beat them!”

Glenn Ashby, mainsail trimmer: “I had a lot of fun this week with Team Tilt. The crew was parachuted into a very competitive fleet and managed to stay the course. We managed to avoid too many bad results and the consistency paid off in the end. We were especially successful at getting back on track after the opening day! It is a great surprise to win this world title, the team has worked very hard and it has paid off!”