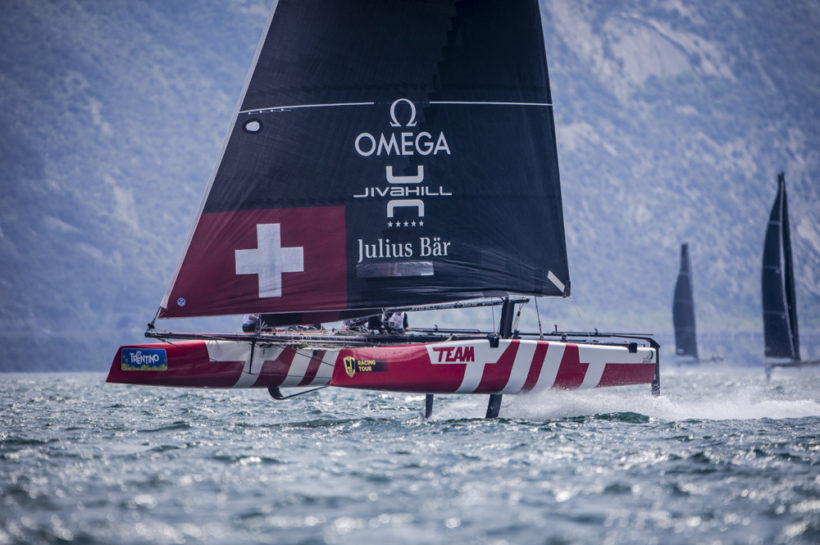 Team Tilt is excited to announce that the squad will race the first official GC32 World Championships on Lake Garda in Italy later this month (23-27 May) against fifteen of the best teams from the GC32 Racing Tour and the Extreme Sailing Series.

The team is focussed on Olympic sailing this season with Sébastien Schneiter and Lucien Cujean’s 49er campaign leading the charge for the Tokyo Games. The pair started the year well with a sixth place at the Miami World Cup, followed by an eighth in Palma de Mallorca. The two other Team Tilt Olympic campaigns are also developing well with Maud Jayet on the Laser Radial and Nils Theuninck winning the Under-23 Finn European Championships.

In 2017, the GC32 Racing Tour and the Extreme Sailing Series GC32 fleets came together for an unofficial championship event in Muscat, Oman, that saw Team Tilt post a fifth place overall. They went one better just a few weeks later, finishing second at the GC32 Riva Cup at the same venue on Lake Garda that will host the World Championships at the end of the month.

That was the last outing for the Team Tilt GC32 crew, so their expectations are moderate with no specific goal in mind for this year’s event. The crew is the same that raced the 2013 and 2017 Red Bull Youth America’s Cup events and they will be joined by a very distinguished guest, with Australian Glenn Ashby returning to the Swiss boat for the first time since winning the America’s Cup last year with Emirates Team New Zealand. The skipper of Emirates Team New Zealand is no stranger to the team having raced in Riva, Malcesine and Palma de Mallorca with Team Tilt in 2016.

For more information about the event, please go to: https://www.gc32worlds.com

Quotes from the team:
Sébastien Schneiter, skipper : “We are certainly not starting as favourites as we haven’t sailed the GC32 since Riva del Garda last year! The boat has been well prepared, and we know it very well, we have also sailed a lot on Lake Garda, so we should be able to win a few races. We don’t have any specific objectives and we don’t really know what level the other teams are going to be at, but we are capable of good things!

“The team is great, a group of friends that knows one another very well, accompanied by Glenn who we can learn a lot from on the art of foiling. I am really excited to be sailing on this magnificent stretch of water and to be foiling again!”

Glenn Ashby, mainsail trimmer : “I am really excited to be back sailing with the Team Tilt guys on the GC32 again, and it’s great to continue the relationship between Team Tilt, myself and Emirates Team New Zealand.

“We had a great season together back in 2016 on the GC32 and the young team has continued to develop and impress since then. I think the bar has been raised so I’m looking forward to some solid results with them at the upcoming World Championships racing in one of my favourite sailing and foiling locations, Lake Garda in Italy.”

Tanguy Cariou, coach and team manager : “We are less prepared than the other teams and are aware that we are arriving as outsiders, but if we manage our 10 days of training well, then we should be able to aim for a podium. Our crew knows the boat well and we finished second on this Lake last year, so I am optimistic!”