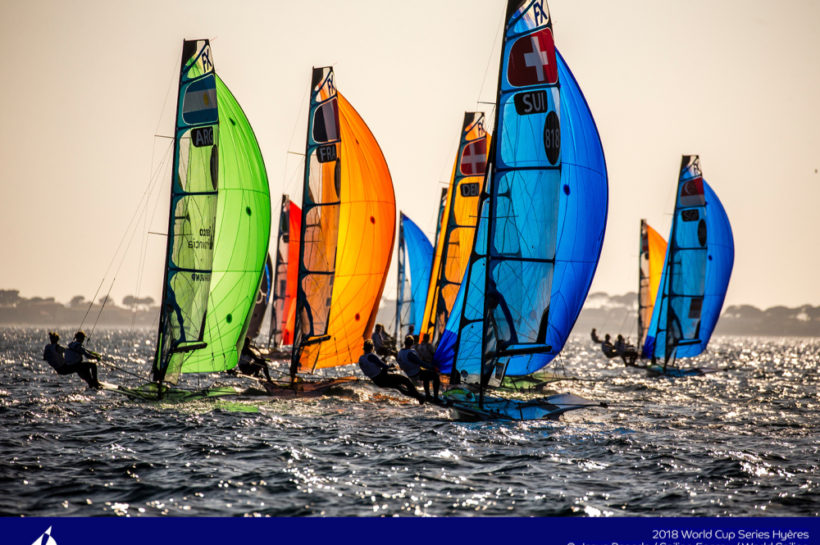 The third World Cup Series organized by World Sailing was held in Hyères (France), April 22-29. Well known for its strong breeze, the venue didn’t deliver the expected conditions. The 647 sailors had a week of light and very shifty winds, causing long waits on shore and on the water. The 49er sailed only 7 out of the 12 races scheduled…

Lucien and Sébastien (49er) finish 26th, a result below their expectations : « It didn’t work as well as the past regattas in Miami and Palma. We didn’t chose the right tactics, on a difficult race course. We learned a lot though, and we know what we have to work on in the next weeks. »

The 49er team will train in Aarhus before the Europeans, that will be held in Poland in July. Besides the 49er, they will also sail the GC32 Worlds in Riva (ITA) next month.

Two other teams sailed under the colors of Team Tilt in Hyères : Nils Theuninck (Finn, 24th) and Maud Jayet (Laser Radial, 33rd). Nils is already training in Riva with his sparring partners, and will also compete in the GC32 Worlds with Sebastien and Lucien.

Maud is in La Rochelle (FRA) training for the Europeans, that will be held next week.