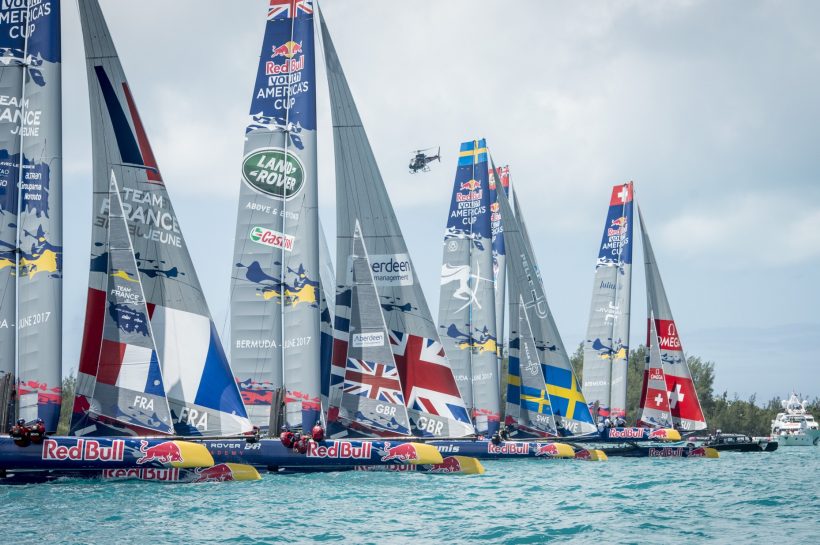 Switzerland’s Team Tilt, led by Sebastien Schneiter, ended the opening day of the Red Bull Youth America’s Cup finals (a youth version of the main event reserved for 18-24 year olds) in second place overall with one day left to go. The young team performed well in challenging conditions. The Team Tilt crew were fresh from a well-deserved three-day break from racing after qualifying for the finals last week in a hard-fought two-day battle, also in non-foiling light airs, that saw them come through in third place having won the final race. They spent their downtime debriefing, working on the boat and maintaining their fitness levels ahead of today’s competition.
Activities on the Great Sound got underway this morning with the eight finalists tuning up ahead of the main event that kicked off at 1400 local time. With wind conditions settling in at 7-9 knots, there was to be no foiling again for the AC45F catamarans.
After two disappointing starts in the first two races of the day, Team Tilt fought back well to post a 5th and a 3rd place. An excellent start in the final race saw them finish with a 4th place putting them in second overall going into the last day.
Today’s racing had on the water umpiring which added a new dimension to the competition for the youth sailors, with any protests being resolved instantly on the water and the penalty being communicated to the teams through an onboard lighting system.  At the close of day one, British team Land Rover BAR Academy sits at the top of the provisional leaderboard with seven points ahead of Team Tilt and Team France Jeune on equal points.
Don’t miss the final three races of the Red Bull Youth America’s Cup live on Lemans Bleu Television (for our Swiss followers) and on Red Bull TV on Wednesday 21 June from 1905 CET and 1405 local time.
Sebastien Schneiter, skipper: “We can’t pay too much attention to the provisional results because everything will come down to the final race tomorrow. We are on a roll and that makes us happy. We need to improve our starts for tomorrow; if we can start well then the race is much easier to manage.”
Alex Schneiter, team leader: “They needed to be consistent in these races and they have been. The race course is very tricky both in terms of wind direction and strength. They improved throughout the day which is very positive. We are currently lying second overall so there is everything still to play for!”

Tanguy Cariou, sports director: “The leaderboard is very tight, except for the British team who have a comfortable advantage. Our position is positive going into the final day, the results are still wide open. We sailed well in terms of positioning, tactics, boat speed and boat handling. For day two, we will correct a few things, particularly our starts.” Red Bull Youth America’s Cup finals – provisional results Final results – points per race*