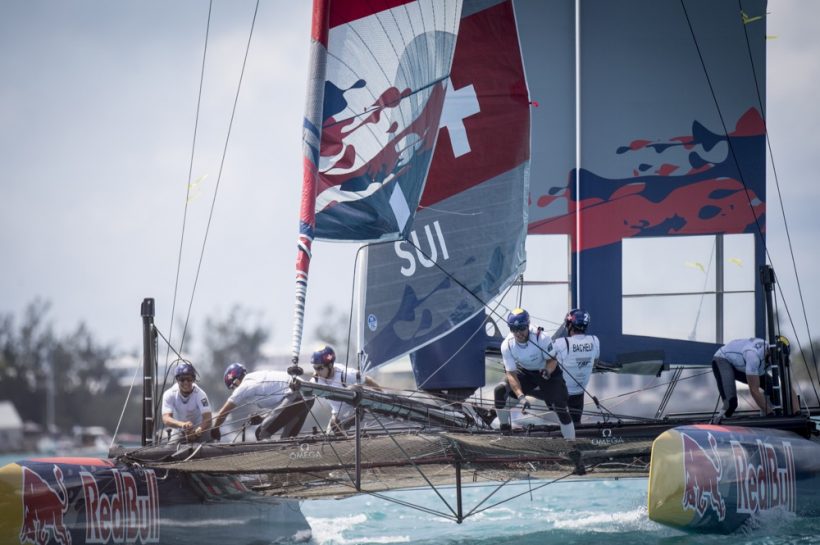 Switzerland qualifies for the Red Bull Youth America’s Cup finals, after six qualifying races on June 15 and June 16. Sébastien Schneiter and his team finish the qualifiers at the 3rd place, only one point behind the second, SVB Team Germany. ! After a difficult start on the first day, the boys showed their full potential on the next day : finishing second and then winning a race was the best way to finish the qualifiers !
Alongside some of the world’s best sailors, Team Tilt proudly represented Switzerland and the team’s partners on the Great Sound. Team Leader Alex Schneiter is positive at the end of the qualifiers : « We reached our first target – qualified Switzerland for the finals ! We had some issues getting into the game in the beginning, but the boys adapted and improved on the second day : they had a good speed, did good manoeuvres and showed they’re able to perform under pressure. I think this tough day was actually positive for the team : they did a good debrief and learned from their mistakes. They have the potential to perform on D-Day. This race format is very complicated, with only 6 very short races on two days. There’s no space for mistakes ! »
After months training on the GC32, where Team Tilt met almost all of their RBYAC competitors and signed good performances, moving to the AC45F wasn’t easy. Above all when the team trains a lot the foiling technique, and ends up racing in very light wind conditions, without being able to foil… « It’s a heavy boat, less reactive than the GC32. Races are very tight… » adds Alex. « I’m confident about the Team’s ability to reach our target : finish on the podium of the 2017 Red Bull Youth America’s Cup ! »
After sailing the qualifiers in a six boat fleet, Team Tilt will race in a big 8 boat fleet during the finals. The game will be even tougher !