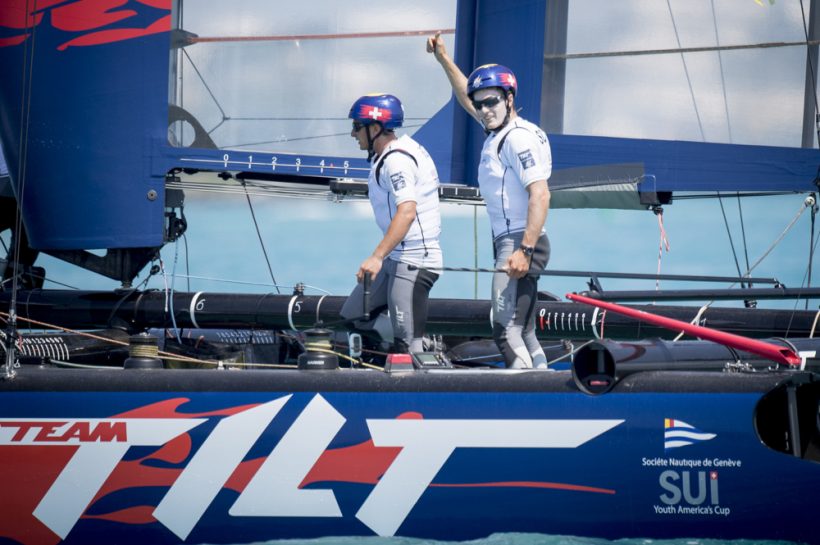 After an intense round of qualifiers, Team Tilt managed to gain enough momentum to move through to the finals of the Red Bull Youth America’s Cup today. The young Swiss team got off to a rocky start on Thursday but regrouped and came back strong on day two to take a victory in the final race of the day. The scoreboard is now reset to zero and the battle for the Red Bull Youth America’s Cup title begins on the 20 June on the Great Sound of Bermuda.

It all came down to the wire today. With the teams in Group A closely matched, Team Tilt went into the final round in fourth place, two points ahead of fifth placed Denmark and two points behind third placed France. Team Tilt had to finish the final race well to make the cut and they delivered! The team, led by Sebastien Schneiter, fought off the Danes right up to the finish line and managed to hold them off to finish on a win!

In Group A, the four qualified teams are: Sweden, Germany, France and Switzerland. They will face the four qualified in Group B: Spain, New Zealand, the UK and Bermuda.
With three days to the finals, the Team Tilt crew plan to recharge their batteries, to do some physical training and to debrief. Tanguy Cariou, their sports director, will help the team regroup and avoid repeating any errors made during the qualifiers. The finals will be broadcast live on Red Bull TV on the 20 and 21 June from 1905CET (1405BDA).

Tanguy Cariou, sports director: “It was a good day for us, despite a few errors especially during the first race. Our performance was much better than yesterday. We are of course very happy to have qualified and have shown our ability to bounce back after a bad day. Today the team had to fight right up until the last mark rounding to ensure our passage into the finals. That’s the challenge of this format, the tension is non-stop. We now start again from scratch and are focussed on doing our best in the finals!”

Sebastien Schneiter: “We are not hugely happy with the way we sailed these qualifiers, but today we learned that we can sail fast and under pressure. We managed the final race well, despite the Danish trying to let the French pass, it was an intense match race to the very end! We will have a good debrief over the next few days and aim to improve our performance and especially our starts. We are not far off the pace of the leaders, but there is still some work to do to match the Swedes for example. With the qualifiers behind us, we are approaching the finals with humility.”