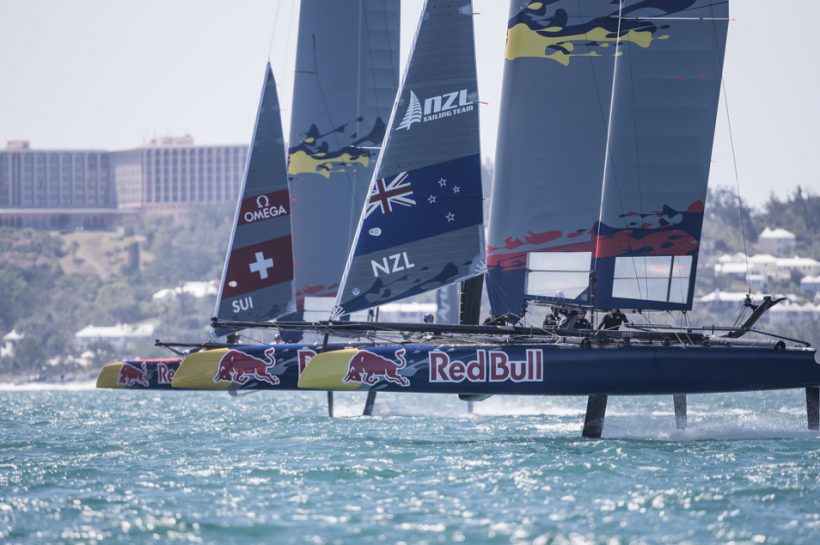 The countdown to the Red Bull Youth America’s Cup has begun and Team Tilt, representing Switzerland, are looking forward to the start of the qualifiers on Thursday 15 June. The team, led by Sebastien Schneiter, is one of 12 challengers for Red Bull Youth America’s Cup honours and competition will be fierce in the under 24 event which has become a springboard for ambitious athletes looking for a future in professional sailing.

The first group of six teams, Pool B, kicked off their qualifiers yesterday while Team Tilt and the rest of Pool A, watched from the side lines. Each Pool will race six rounds to determine the top four teams. The four teams selected from each Pool (eight in total) will fleet race in the finals on the 20 and 21 June (broadcast live on servustv.com).

Since arriving in Bermuda on the 1 June, the Team Tilt crew have been busy; in between racing against or watching other youth teams, they have kept up their intense fitness regime and of course have been watching the America’s Cup action out on the Great Sound and supporting Emirates Team New Zealand, their partner!

Switzerland’s Team Tilt proudly represents partners, Jiva Hill Resort, Julius Baer and Omega and races in the colours of the Société Nautique de Genève. This will be Team Tilt’s second Red Bull Youth America’s Cup event (they finished 4th in 2013) and they are counting down the minutes to the start signal!

Sebastien Schneiter, Team Tilt skipper: “The training went well, although we would have liked to have been able to race the full seven days allocated. As it is, we only managed four due to weather conditions, but they were long sessions and very productive. We have learned a lot, we made mistakes that we will not take into the racing with us and we have also shown some strengths. It is really encouraging; the team is looking forward to starting the racing and to seeing where we stand!”

Tanguy Cariou, sports director: “We have confirmed our strengths in various conditions and we are aware of what to look out for. The level across the fleet is very even, the teams have different approaches, but everyone will be ready for the competition.  Over the last three years we have put in place a solid professional structure that has raised these youth sailors to a very good level. At this point 80% of the work has been done, now it is down to the team to fight it out on the water!”

Alex Schneiter, team manager: “The challenge over the next few days is enormous and the level of the competitors lives up to the standard of the event. Over the last few years, we have put all our efforts into creating a talented and ambitious young Swiss team. We are ready and proud of the progress we have made. We are looking forward to the extraordinary adventure that is going to unfold over the next few days, and I for one am convinced of the great potential of our young Team Tilt. We are full steam ahead!”