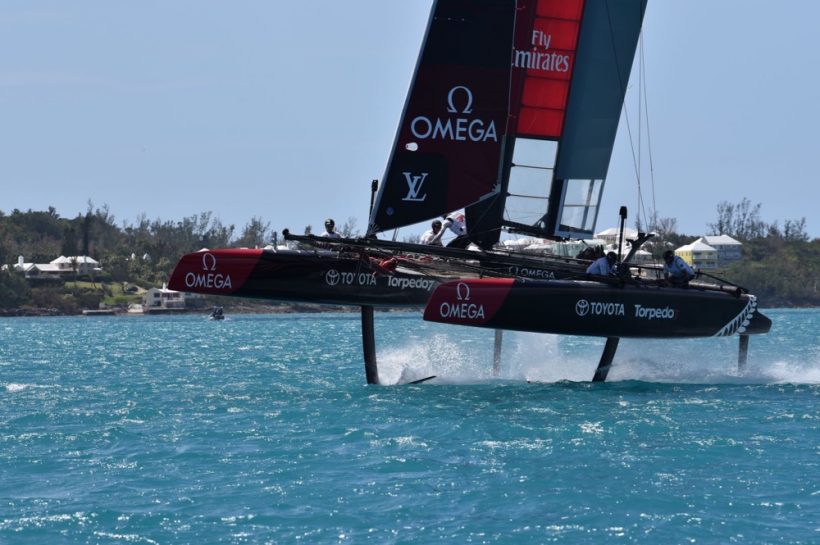 In early April, the youth squad spent a week in Bermuda to familiarise themselves with the AC45F, the foiling catamaran that will be used to race the Red Bull Youth America’s Cup in June on the Great Sound. Benefitting from a unique offering by team partner, Emirates Team New Zealand, Team Tilt was able to use the Kiwi boat and facilities during the week – an unprecedented opportunity for which the team is hugely grateful. Of the seven sailing days permitted in the rules, two were cancelled due to too much wind, but Team Tilt managed to sail for the other five days.

Sebastien, how did this first experience of sailing an AC45F go? “After a few adjustments at the beginning of the week, we found our feet on the new platform and were able to draw a maximum from the experience and to work out what we need to concentrate on ahead of the Red Bull Youth America’s Cup. Thanks to the time spent on the GC32, we have a good handle on foiling, but of course, we are still unfamiliar with the AC45F. It behaves similarly to the GC32, but some of the system adjustments are different, particularly in terms of the wing. We adapted our systems on the GC32 to be more like those onboard the AC45F. The AC platform is ‘easier’ to sail as it is more stable, there is less of a speed differential, so tactics and positioning will be primary.”

How was your level? “We sailed against some future competitors. We knew that on the GC32, we were better, but in Bermuda, we saw that the racing on the AC45s is going to be much tighter!”

What is Bermuda like? “Very pretty, not very big, the people are friendly and the race course is excellent. We can expect 10-12 knots with flat water, although we are likely to have a bit less wind in June. It was a good opportunity to familiarise ourselves with the place, with our house and the Red Bull Youth America’s Cup base.”