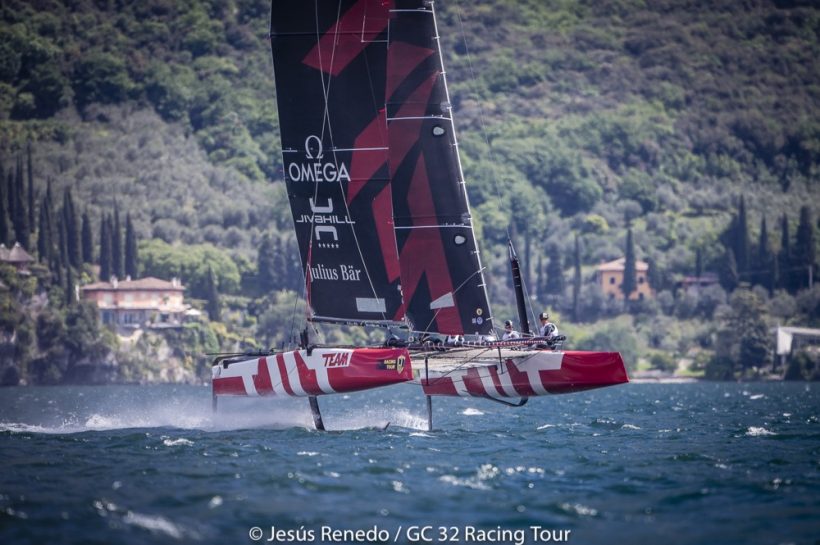 Team Tilt gave a glimpse of their form at the GC32 Riva Cup over the weekend, finishing second overall at their final event before representing Switzerland at the Red Bull Youth America’s Cup in June in Bermuda.
Eleven teams, including two other youth America’s Cup teams – Team France Jeune and Team Bermuda – lined up for the opening event of the GC32 Racing Tour (11-14 May). The four-day regatta got off to a slow start with no wind cancelling play on Thursday. Friday’s conditions were light and shifty making for a tricky start for Team Tilt, but the team, led by Sébastien Schneiter, found their rhythm on Saturday posting five wins in perfect conditions to move up to second place overall. By the end of the weekend, the podium was 100% Swiss with Realteam in first place, Team Tilt in second and Armin Strom, third. With two weeks of preparations on Lake Garda ahead of the Riva Cup, Team Tilt maximised on their final training session ahead of the Red Bull Youth America’s Cup. The team will now prepare for the move to Bermuda where training on the AC45 starts on the 4 June.
Results: www.gc32racingtour.com/results Quotes: Sébastien Schneiter, skipper: “We had a slow start, but in the end, did well against high level teams. Our boat handling, speed and communications were all good. We were here to win, but I am nonetheless very happy with second place and am proud of my team. To finish with five wins and two second places is very motivating for the whole team ahead of the Red Bull Youth America’s Cup. It was good to race other RBYAC teams, now we’ve competed against almost all of them. Having said that, the racing in June in Bermuda is over just two days so anything can happen!”
Tanguy Cariou, sports director: “Our strength here was our boat handling and manoeuvres, these aspects become more important than tactics in sustained conditions. It was an interesting regatta, we bounced back well from the first day, it was a positive event. We will now do some work on our tactics and race management, but we have all the right elements to do well at the Red Bull Youth America’s Cup. It is good for our confidence to finish on this note! We are specialists on the GC32, but that won’t give us an advantage on the AC45. The knowledge the team has gained of foiling boats however is precious.”
Team Tilt crew – GC32 Riva Cup
Sébastien Schneiter – helmsman/skipper
Jérémy Bachelin – crew
Jocelyn Keller – crew
Arthur Cevey – crew