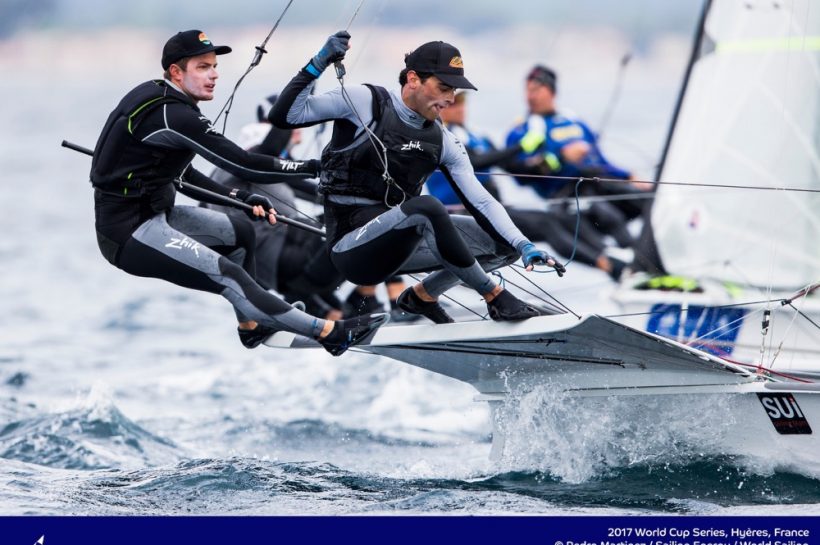 While all eyes are on the Red Bull Youth America’s Cup, which is almost upon us, the Team Tilt 49er crew remains firmly focussed on the Olympic Games in Tokyo. Lucien and Sebastien are on a short break until the end of June and are taking advantage of this period to take delivery of a new 49er financed by the Société Nautique de Genève’s ‘Fond Ambition’.

Of the three events so far this year, two were World Cups and the intensity was good for the Team Tilt duo who posted a 14th in Miami, USA, a 19th in Palma de Mallorca, Spain and a 13th in Hyeres, France. Sebastien and Lucien showed improvement throughout.

“We were consistent in Hyeres, it was a very positive result,” said Lucien. “We are happy with these results, but we always want more! The level is high and we are in a phase of slow progress where every detail counts.”Tom Saunt remains head coach for the 49er campaign, although the team likes to ring the changes. “With 100 days per year with Tom, it is beneficial to switch coaches from time to time, which is why Pietro Sibello also coaches us,” explained Lucien. “Matt Cooper is returning to the project for the mental training. He was with us for the Red Bull Youth America’s Cup 2013 and he did a fantastic job. Communication is paramount between Sebastien and I. It’s like living as a couple, there can be no secrets under the pillow! And Matt with his direct manner helps us a lot with this aspect. He boosts us and is a good fit for us.”

The duo will spend some time sailing on Lake Geneva over the coming days and will invite young sailors, Bachelin and Haenssler to train with them – a good opportunity for knowledge transfer to the younger crew! From July, the training camps begin in Porto, followed by the Europeans in Kiel, then back to Porto for the Worlds at the end of August.