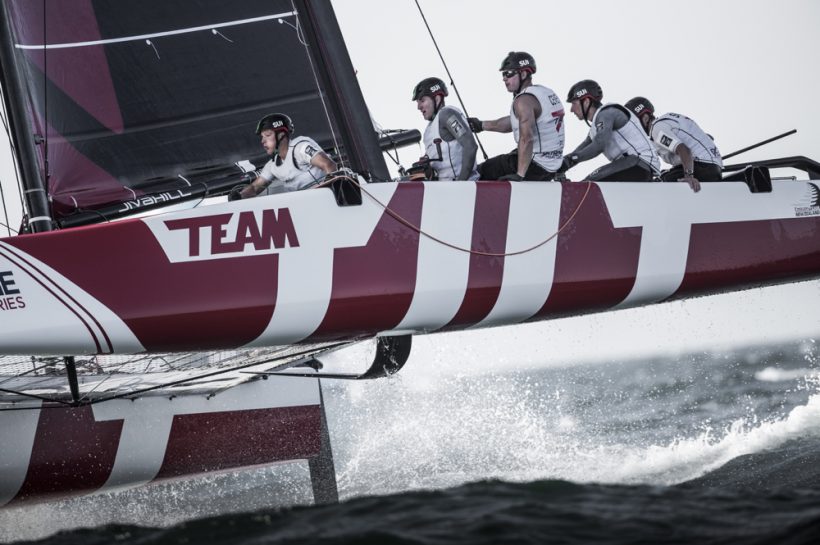 Team Tilt finishes fifth of Extreme Sailing Series Act 1 in Muscat. An honorable result for the young crew under 24 that was sailing against some of the world’s best teams. The regatta line-up included America’s Cup stars as well as world and Olympic medallists. With four race wins and several top 3 results, our young team managed finishing ahead of these elite teams.

After the GC32 Championship a week ago, this was the second foiling regatta for our 100% RBYAC team. Seven swiss sailors under 24 sailed onboard Team Tilt, that faced other RBYAC such as New Zealand (finished 9th), and Great Britain (finished 8th). As well as the Danish and the German youth teams during the GC32 Championship one week ago.

« It was a good opportunity to compare our level to the other RBYAC teams, and we’re quite happy with the result », said skipper Schneiter. « We must keep on working hard to maintain our level, because each team will improve until June. These short races were the perfect training for us : we faced every situation and know which points we must improve. We can beat some of the bests, we have to be more consistent now! »

« We sailed in every wind and sea conditions during this event, and managed winning races ; we’re very happy », adds Jocelyn Keller. « It was a very intense week here, with big thrills onboard! »