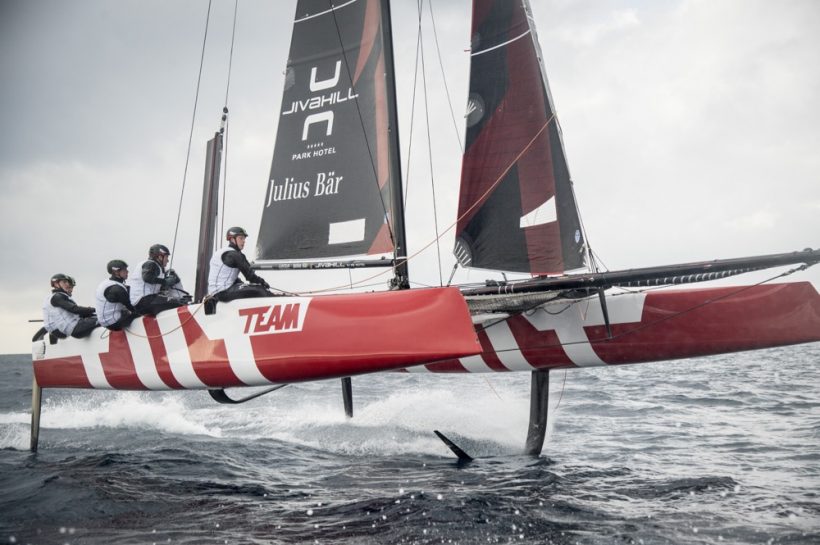 Team Tilt will race it’s first event with the young crew preparing the Red Bull Youth America’s Cup : the GC32 Championship in Oman, February 28 to March 5. The team will race against some of the world’s best teams, for the first championship of the foiling multihulls.

Sébastien, Arthur, Jérémy, Jocelyn, Nils, Florian and Guillaume have been training on site since a few days, under the coaching of Tanguy Cariou and Pietro Sibello, and helped by boat captain Jimmy Le Baut.
After the GC32 Championship, Team Tilt will take part in the Extreme Sailing Series Act 1, in Oman again. More information

A long one month stay in Muscat, that will enable the team to sail against some of the worlds best multihull teams. « We are looking forward to going to Oman, it’s great to have the two events so close – timing-wise this doesn’t happen often,” said skipper Sébastien Schneiter. « We think that the Extreme Sailing Series will be more difficult for us than the championship as we aren’t used to these kind of regattas, with a very intense rhythm and a lot of manoeuvres. It will be good training for us, but we know result-wise it might be tough. But we’re looking forward to sailing with the rest of the fleet who don’t compete on the GC32 Racing Tour, including our friends from Alinghi, who we race against in the D35 on Lake Geneva. »

Once the Oman’s regattas will be over, the GC32 will be shipped to Malcesine (ITA), where the team will continue training for the Red Bull Youth America’s Cup.

Since the beginning of the year, we present each member of the team. You can see the videos on our page Facebook or on chaine YouTube. You can watch them here :