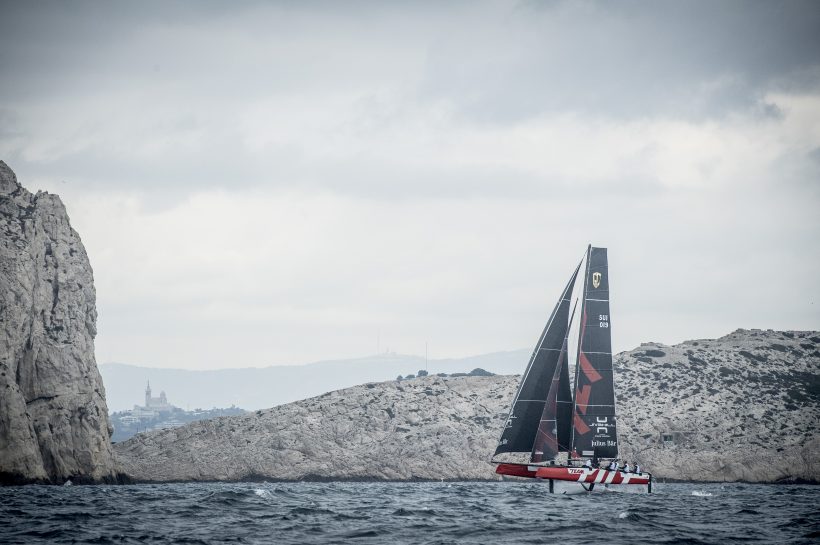 Twelve teams of youth sailors aged 19 to 25 have been selected to race the RBYAC 2017 in Bermuda in June. They will compete on the foiling AC45s that were used for the Louis Vuitton America’s Cup World Series events and will race in the lead up to the America’s Cup itself. Six of the competitors are mentored by Cup teams and the other six were chosen from 20 candidates during a selection process managed by double-Olympic medallists Roman Hagara and Hans Peter Steinacher, founders of the event in 2013. Team Tilt was evaluated in Marseille last November.

“The Red Bull Youth America’s Cup has changed the America’s Cup, proving that youth sailors have their place on these extremely powerful new boats,” said Steinacher. “The foiling AC45s can reach top speeds over 40 knots, so the spectacle on the crystal-clear waters of Bermuda will be breath taking!

The following six teams are affiliated to an America’s Cup team:

For more information on the Red Bull Youth America Cup, the sailing conditions in Bermuda and the foiling AC45s, please go to the official press release. 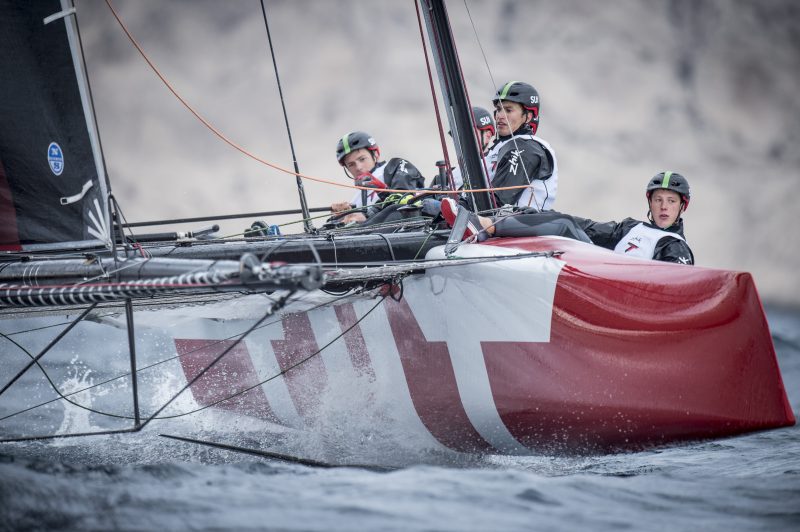 Choosing seven sailors aged between 19 and 25 out of 33 candidates to represent Switzerland in Bermuda in June was challenging to say the least. “We selected them based on their skills, but above all because they represent the broadest possible crew combination,” explained Tanguy Cariou, sports director. “The overall level was high and with very different profiles. We spent a lot of time observing the sailors on the boat and then our final decision at the end of the year was guided by the fitness tests organised by Sport Quest.”

The list below presents the seven sailors of which three are from Geneva, three are from Vaud and one is from Winterthur on the Swiss German side of the country. There are only six spots on the foiling AC45, so the 7th man will be the reservist ready to step in at the last moment in the event of injury or illness. “Getting to this point has taken major personal commitment, both physically and on the water,” said Guillaume Rigot. “There is still a lot of work to do, but it is very motivating to have been selected!”

Team Tilt sailors for the Red Bull Youth America’s Cup:
(Name, role on board, role ashore, date of birth, place of residence)
And of course, behind the sailors, there is a team hard at work!

The winter training in Marseille on the GC32 did nothing to cool the youth sailors’ passion for this challenge, they worked hard on the water and trained hard in the Sport Quest gym in Geneva.  Their trusty GC32 is now en route to the Sultanate of Oman where the team will train in warm weather and steady winds ahead of the first GC32 Championship at the end of February; an event that will provide a perfect opportunity to compete against some of the best teams in the world.
In April, the team will return to Europe to train on the more familiar waters of Lake Garda in Italy ahead of the first event of the GC32 Racing Tour that kicks off mid-May. At the end of May, the team will head to Bermuda to get down to business.

The Red Bull Youth America’s Cup qualifying regattas will be raced in two pools of eight boats (maximum), all fighting for four places in the final.

We will know which group Team Tilt is in by the 6 February. 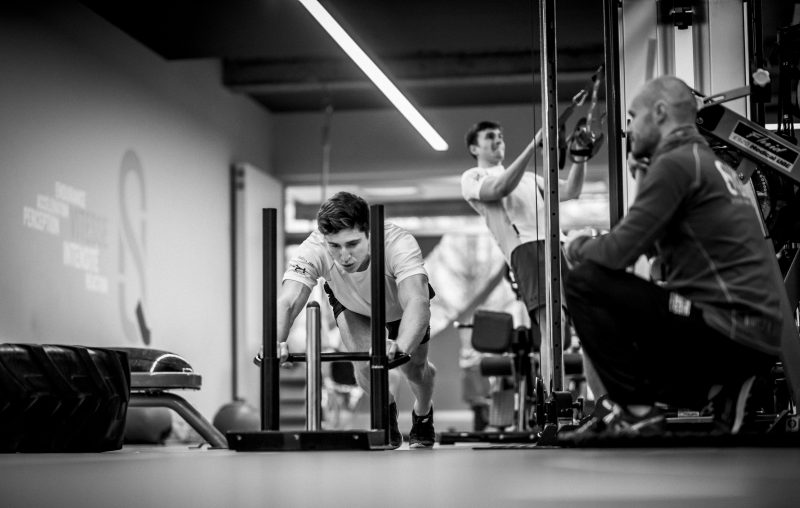 The 2013 media team returns for the next edition of the Red Bull Youth America’s Cup, with Christophe Margot doing videography, Loris von Siebenthal managing photography and Sophia Urban from MaxComm doing the writing. The media team will tell the story of Team Tilt’s preparations for the RBYAC through crew member presentations and interviews on the team’s Facebook page and YouTube channel

Nils Theuninck (trimmer) is the first to go under the spotlight. His full interview will be online on January 26, here’s a taste of what lies ahead: https://youtu.be/5wFQ3BBJvXc 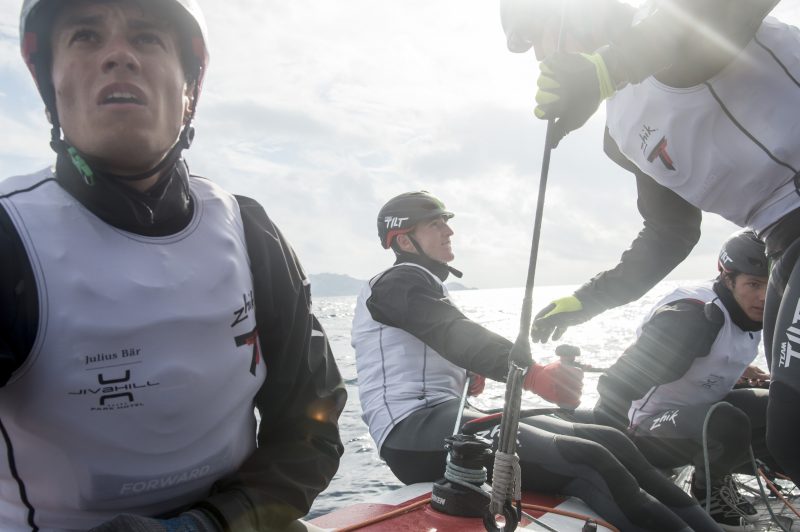 Florian Trüb, 22, is somewhat outnumbered by his six Swiss French crew mates on Team Tilt, but that doesn’t worry the 6ft4in (1.92m) giant from Winterthur! “It’s good for my French,” he laughed. “I’m proud to be the only Swiss German on the crew, but to be honest our origins mean very little, we just want to sail together and work towards being the best we can be at the Youths! The only difference between us is the language and to start with I admit I didn’t understand what people were saying on board, but that is all straightened out now and I understand just fine. It is important to manage the different personalities on the team.  “The project is extremely well managed, almost up to Swiss German standards,” he joked. “This is a good opportunity to raise awareness of Team Tilt in my region. And I will also take the opportunity to share the Swiss German side of Switzerland with my team mates and to improve their language skills – there is still some way to go on this front, but they are getting there!”

Tactician Guillaume Rigot added: “Florian is the only team member that we didn’t know, but we all got on very well with him from the start. “Physically he is really good, which is a bonus for us, he even competes with Arthur! It’s great to have a Swiss German on the team, we are showcasing a Swiss project so it is important. Welcome Florian!”

No rest for the Olympians 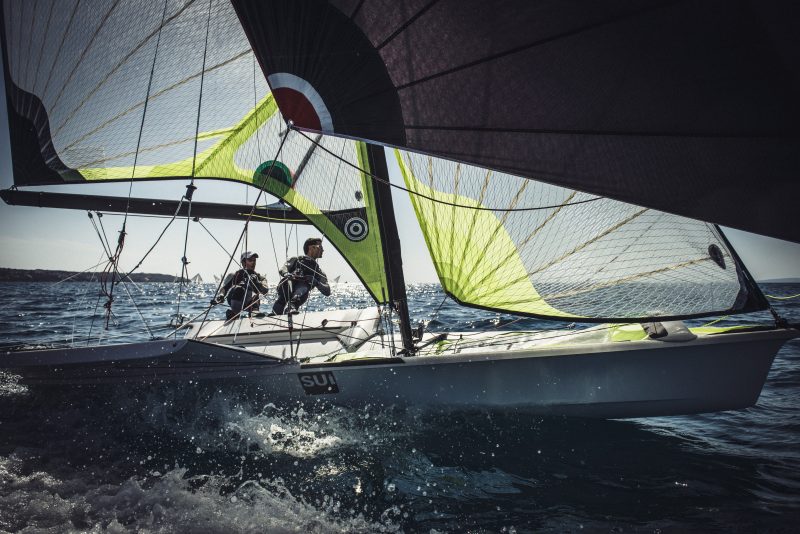 While the focus is on the Red Bull Youth America’s Cup for the first half of the 2017 season, the Tokyo 2020 Olympic campaign will return to the forefront again this summer. After a two-week break, Sébastien Schneiter and Lucien Cujean are back to business and training on the 49er. “We just finished a training camp in Cadiz, Spain, with our three training partners from the UK, Brasil and Germany, where we worked on our weak points, in particular our coordination and boat handling in 6-9 knots. We spent the mornings focussed on manoeuvres followed by speed tests in the afternoons. We still have some work to do in this wind bracket, but we are very motivated and are looking forward to the next session!”   Team Tilt’s Maud Jayet also has a busy season ahead on the Laser Radial and she has a new coach for 2017: Diego Fructuoso will accompany her on the pathway to Tokyo 2020.

The first big event of the season for the three Olympic sailors is the World Cup in Miami, USA, from the 23-28 January. Other big events throughout the season are as follows:

Team Tilt’s loyal partner, Jiva Hill Resort, is celebrating its 10th anniversary this year. The hotel, located in Crozet, just a few minutes from Geneva, has a year-long celebration programme. To find out more, please click here. “The Jiva Hill Resort has partnered with Team Tilt since the beginning of their adventure. They are an extraordinary team of young athletes with strong values that we share, such as excellence and surpassing oneself. Taking up a challenge and raising the bar is a state of mind that we recognise. Today, Team Tilt mentors and trains young people to such a professional standard that they are competing against the world’s best and taking Swiss sailing to the top steps of the podium.

“We are constant in our support for the team and follow them closely on social media, proudly relaying their achievements to our teams and our customers. They are a team of young athletes whose professionalism and vision makes us dream! We wish them the best of luck for 2017,” said Fabrice Mercier, General Manager, Jiva Hill Resort.