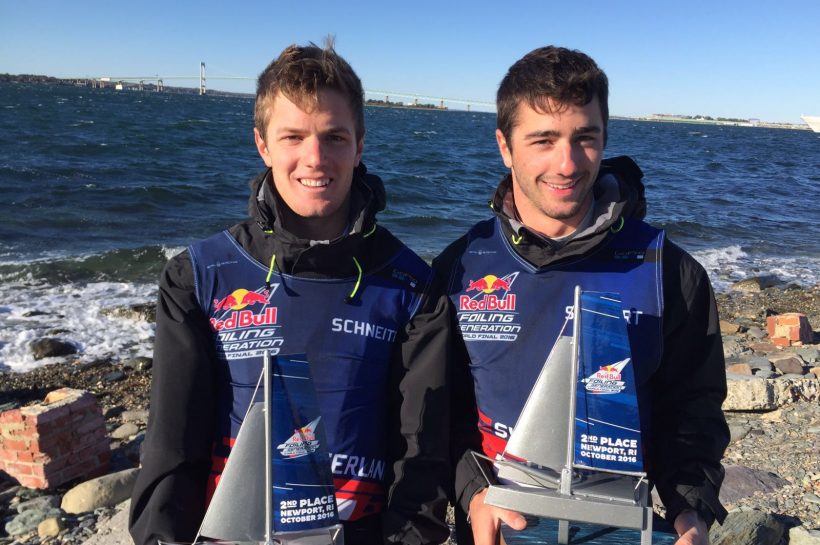 The weather conditions in Newport meant that Sunday’s scheduled grand finale was cancelled and so the final ranking was calculated based on the semi-finals. Team Tilt had posted good results during the qualifying rounds but the New Zealanders dominated during the semis, winning what turned out to be the final phase of the event.

“Winning second overall is fantastic, but leaves us with mixed feelings,” said Sebastien Schneiter. “As we raced the qualifiers, we realised that victory was attainable so we are a bit frustrated not to have had our chance in the finals. Nonetheless, we will have great memories of this venue and what has been a superb event and we are very grateful to organisers Roman Hagara and Hans Peter Steinacher who have put this structure in place and made it available to young sailing talent the world over.”

The Red Bull Foiling Generation was initiated by Olympic champions, Roman Hagara and Hans Peter Steinacher in 2015 to give young sailing talent aged from 16 to 20 the opportunity to discover competitive racing using Flying Phantom foiling catamarans. The event has gone from strength to strength with 16 teams representing 16 nations qualified to race the 2016 finals.

“It was an excellent opportunity for us to line up with some of the best youth sailors in the world,” said Gregoire Siegwart. “We are pleased with our second place after battling hard in the semi-finals with the Kiwis who only just beat us! It was great experience for the future.”

Team Tilt will now focus on preparing for the Red Bull Youth America’s Cup which kicks off in Bermuda from 13-23 June 2017.