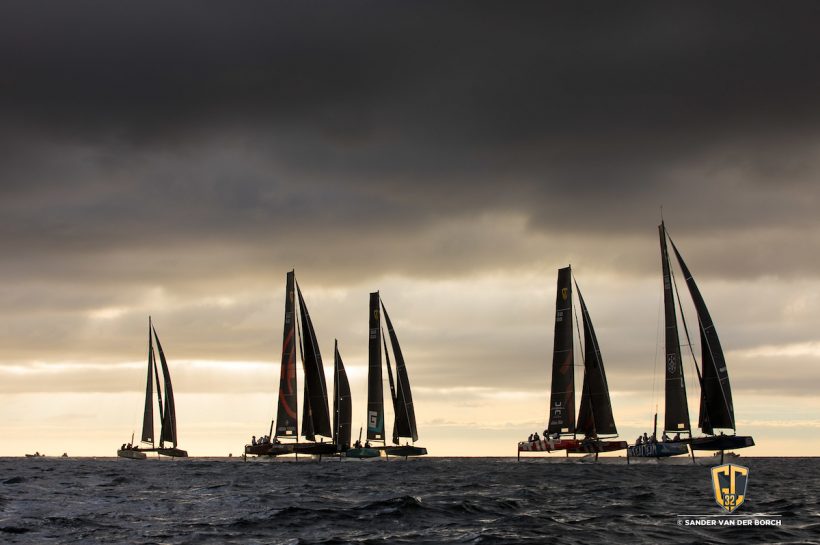 Team Tilt posted a fourth place at the final event of the GC32 season in Marseille over the weekend to secure second place overall on the 2016 GC32 Racing Tour season ranking. After five events across Europe, the French team Norauto was victorious and Armin Strom completed the podium in third place. Arnaud Psarofaghis (on loan from Alinghi) led the Team Tilt squad during the first half of the season, handing leadership back to Sebastien Schneiter after the Olympics.

Marseille, France, 17 October 2016 – The youth sailors representing Team Tilt proudly took the second step of the GC32 Racing Tour 2016 podium yesterday after a hard fought five-stage season that travelled to five venues across Europe, culminating in Marseille over the weekend. The annual championship was an opportunity for the youth squad to learn to race a foiling boat as a team. Talented helmsman, Arnaud Psarofaghis, on loan from Alinghi, took up skippering duties at the start of the season, handing back to Sebastien Schneiter (21) towards the end. The young team punched above its weight all season posting four podium finishes out of five events. Norauto (Franck Cammas/Adam Minoprio) won the championship while Armin Strom (Flavio Marazzi) completed the podium.

Marseille played host to the final stage of the season as part of Marseille One Design last weekend and provided challenging conditions for the teams with 50knots on the opening day pinning the flying boats in the harbour. After nine races over three days in light airs, Team Tilt finished fourth.

The regatta was the culmination of a few weeks of training in Marseille for the Team Tilt Red Bull Youth America’s Cup squad who were put through their paces by the RBYAC representatives at the beginning of the week. The squad will continue to train in the south of France for the next few weeks before the boat goes into the shed for a refit over the winter. At the beginning of 2017, the team will move to warmer climes to continue the training schedule ahead of the RBYAC.

The next and final regatta of the season for Team Tilt is the Red Bull Foiling Generation closing event on the Flying Phantom in Newport, USA, next weekend.
Quotes:

Sebastien Schneiter, skipper: “We had a good training week, but we did not manage to sail cleanly and simply during the regatta. The conditions were challenging and we didn’t manage to execute things that we know we can do well. We have learned a huge amount this summer sailing the GC32, particularly from Glenn Ashby and Arnaud Psarofaghis who taught us the finer aspects of foiling. We demonstrated towards the end of the season that we can perform without them on board, but that we lack consistency. I am flying to Newport tomorrow for the Red Bull Foiling Generation final and after that will come straight back to Marseille to continue training as part of our youth squad!”

Lucien Cujean: “It’s a shame that we did not manage to nail this final Grand Prix, but Team Tilt demonstrated some fine moments this season. The overall level of the fleet improved throughout the year – you have to be fit both physically and mentally to perform in these conditions!”

Jeremy Bachelin: “We are all a bit tired after such an intense event. The beginning of the week with the Red Bull Youth America’s Cup team went well, everyone is settling into a role. We still have some work to do, particularly the coordination and communication at the heart of the team, but I am delighted to be training as part of the crew!”

Team Tilt youth squad sailors were also able to sail on other boats: Nils Theuninck with Realteam and Janik Roempp with Team Orange.