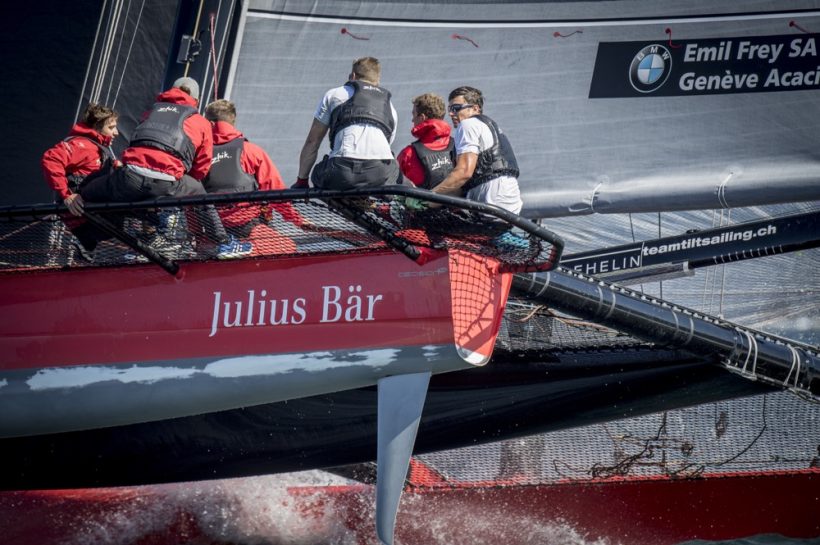 Team Tilt finished the 2016 D35 Trophy Championship in third place overall. The young team led by Sebastien Schneiter posted a third place at the final event of the season hosted by the Société Nautique de Genève this weekend. Ladycat powered by Spindrift won the championship and Alinghi finished in second place.

The Olympic Games were the primary focus for Sebastien Schneiter and his team mate Lucien Cujean at the start of the year, so helming duties on the D35 were shared with Alex Schneiter. After the duo posted a 13th place in Rio, Sebastien stepped back on board the catamaran to train with the Team Tilt youth squad that has been selected to race the Red Bull Youth America’s Cup.

After ten races (including three outright wins) in mixed conditions at the Grand Prix de Cloture this weekend hosted by the Société Nautique de Genève, the youth team confirmed its ability to punch above its weight against some of the biggest names in sailing posting a third place to seal its hold on the third step of the Championship podium.

The D35 Trophy may be finished, but the season is not for Team Tilt! The focus will shift to foiling in the coming weeks before a winter dedicated to training on the 49er for Sebastien and Lucien and on the GC32 ahead of the Red Bull Youth America’s Cup.

Quotes from the boat:

Sebastien Schneiter, skipper: “We have made a lot of changes to the crew throughout the season so we are very happy with this result! Overall things have gone well. We still have to improve elements of the new crew configuration and we need more time together on the boat. We did not expect to post such good results at the end of the season with our youth squad – one victory and one podium – it bodes well for the future!”

Alex Schneiter, team manager: “I am delighted with this magnificent result which has come from a lot of hard work and enthusiasm on behalf of the whole team and the sports director, Tanguy Cariou. It shows that we are working in the right direction and that we have chosen a good team for the next Youth America’s Cup. All that remains is for us to defend our second place overall at the GC32 Racing Tour in two weeks time in Marseille.”

Jeremy Bachelin, trimmer: “The new crew members are very motivated, the atmosphere in the team is excellent. We have progressed really well over the past few weeks and know what we need to focus on this winter.”