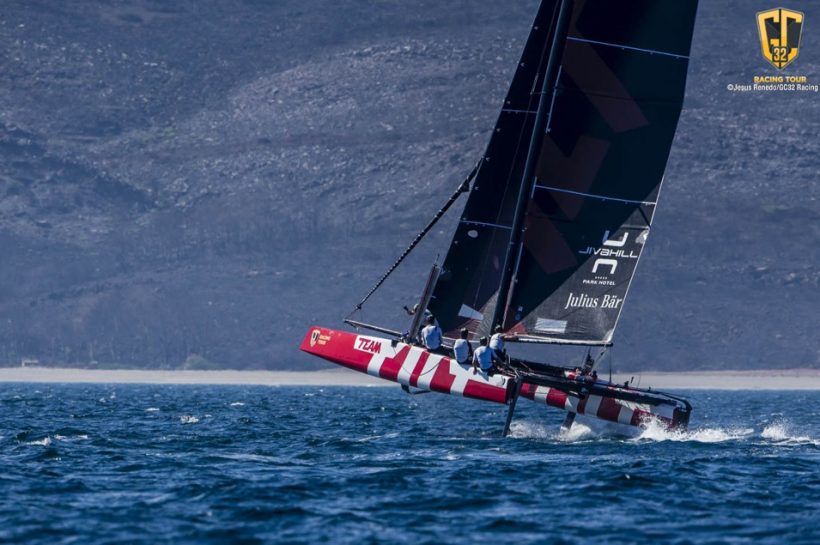 Team Tilt added a second place to its scoreboard this weekend at the GC32 La Reserva de Sotogrande Cup, the penultimate event of what has been a successful season so far for the youth squad. The seven crew members on board the 32-foot flying catamaran posted three outright wins from 15 races to finish second overall after Adam Minoprio on Norauto. Team Engie, skippered by Sebastien Rogues finished in third place.

With the Olympic Games behind him, Sebastien Schneiter reclaimed the helm from Arnaud Psarofaghis’ who had been on ‘loan’ from Alinghi for the season and set about preparing for the Red Bull Youth America’s Cup 2017. With him were the youth sailors that have been selected for the project, some raced the GC32 and others were on board the chase boat to observe foiling best practices.

Team Tilt has been on the GC32 podium since the beginning of the season, including one victory at the second event in Malcesine, putting them in second place overall on the season leaderboard, behind Norauto.

Ahead of the GC32 final in Marseille scheduled for mid-October, Team Tilt returns to Lake Geneva and the Société Nautique de Genève for the closing event of the Decision 35 season – the team is currently in third place just two points behind Alinghi and the crew will be giving it everything they have got!

Quotes from the crew:

Sebastien Schneiter: “It was very different for me on the helm, there was a lot of adrenalin at the start of the week with perfect foiling conditions. By the end of the first day we could see that we were in the hunt and aimed for achieving a second place. We progressed throughout the event, eating away at Norauto’s lead and putting more points between us and third place. The final three days of the event were less windy and the game was more open – it was very interesting for us; a very rewarding and positive week for the team!”

Bryan Mettraux: “We are happy with this result. The communication and boat handling on board was different with the new crew, but that settled down during the week. The conditions were perfect during the opening days of the regatta with 15-20 knots – perfect foiling weather, but lighter conditions during the rest of the event complicated things a bit more for us.”

Tanguy Cariou, coach: “The results demonstrate that our strategy up until now has been good – we started the season with very experienced sailors such as Glenn Ashby and Arnaud Psarofaghis on board, before integrating the youth sailors. We still have some work to do, but the transition is going well – we are heading in the right direction!”