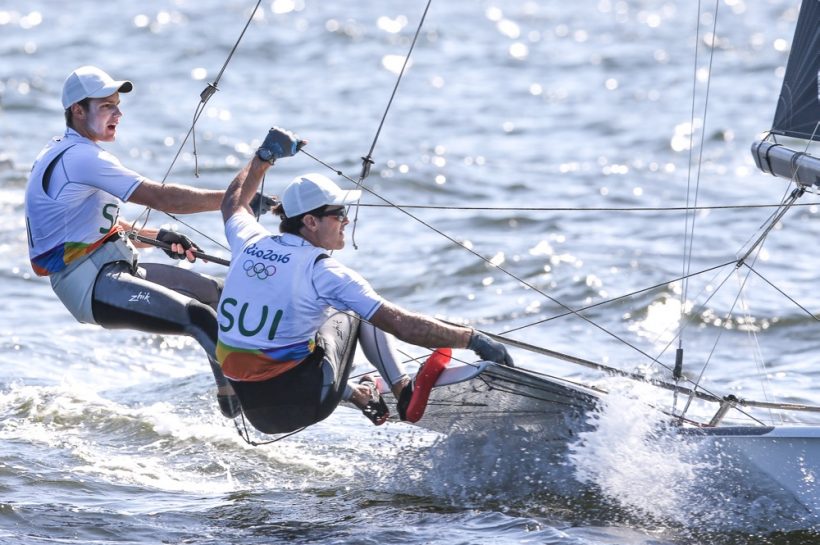 Sebastien and Lucien are Olympians! The duo experienced the magic of the five rings in August in Rio de Janeiro and successfully achieved their top 15 goal with a final ranking of 13th. Finishing four races in the Top 5 and leading the last race at the first mark, they give us the highlights in their own words:

Sebastien Schneiter: “On our final day, we posted a 5th, 17th and another 5th – a very satisfying end to our first Olympic Games! Although we found out about our selection for the Games very late, we still managed to score some good results and beat some of the elite teams that were going for medals. We achieved our top 15 goal and now have four years to improve on our result and aim for the podium!”

Lucien Cujean: “We had nothing to lose on the final day. We were more relaxed and managed to post three excellent races! We achieved our goal that is for sure: 13th is an excellent result for us. We were able to battle it out with the top teams thanks to our boat speed and although we made some tactical mistakes, we will correct those in the future. We plan to use the next four years consolidating our learning from our first Olympic experience and will be working hard on being consistent in Tokyo!”

Glenn Ashby, Olympic Silver Medallist at the Beijing Games in the Tornado Class and a multihull expert, is the skipper of Emirates Team New Zealand for the next America’s Cup. Team Tilt had the pleasure (and the luck) to welcome him on board their GC32 at the start of the season. He is not only an exceptional sailor, but straightforward, kind and talented. We took the opportunity to ask him a few questions during his time with the team:

What was your biggest challenge with this young team? “Often the biggest challenge with young teams is curbing such fantastic overall enthusiasm and really nailing down and picking at the small things and the details of foiling multihull racing that can make the difference between staying at the front end of the fleet and slipping back into the mix, where everything becomes just that much harder. They were all really quick learners and soon were mixing it up with the best in the business.”

What do you wish for them in the future? “I wish the guys nothing but the best for the future. I have no doubt they will do well in both the short term and long term. It will be good to see them in Bermuda at the Red Bull Youth America’s Cup next year. I will look forward to seeing them compete.”

It’s official! The Team Tilt Red Bull Youth America’s Cup squad has been decided. The squad is made up of eight sailors for just six positions on the AC45 and sports director Tanguy Cariou found choosing the sailors extremely challenging: “The choice was incredibly difficult, but after a long selection process that began back in the spring, the final decision came down to compatibility and availability,” he said.

GC32, 49er and Decision 35 – all excellent platforms for training, but don’t forget the Flying Phantom!
The little catamaran is about the best foiling training a sailor can get and the Team Tilt Phantom has been busy this summer both with the Swiss Flying Phantom Series (Team Tilt is lying second overall behind Realteam with one event to go), and with preparations for the Grand Finale of the Red Bull Foiling Generation that kicks off in Newport, USA, in late October.

Having won the Swiss stage in early July, Sebastien Schneiter and Gregoire Siegwart will represent Switzerland against 15 teams from all over the world!

Even the prestigious New York Times is taking note and published a photo of the team last week!

Both the D35 Trophy and the GC32 Racing Tour are reaching a climax and Team Tilt’s consistency on both circuits is paying off with podium finishes in sight at both events. The team’s results are all the more notable for the company that they are keeping with Alinghi and Ladycat powered by Spindrift battling it out at the top of the Decision 35 fleet and teams such as Groupama and Artemis demonstrating their depth of experience on the GC32 Tour. With the Olympics in Rio behind him, Sebastien Schneiter returns to the helm on both catamarans and got the second half of the season off to a good start last weekend winning the Grand Prix du Yacht Club de Genève with the young RBYAC crew on board.

The next couple of months will be intense: a podium finish is confirmed on the D35 Trophy season leaderboard. The team will be pulling out all the stops at the final event of the season, hosted by the Société Nautique de Genève, from 30 September to 1 October.

On the GC32 Racing Tour there are two events to go: the first in Sotogrande in Spain this weekend (22-25 September) and the closing event in Marseille, France, from the 13-16 October. Team Tilt is currently lying second on the season leaderboard and will be doing their utmost to maintain their podium position with a young team on board.