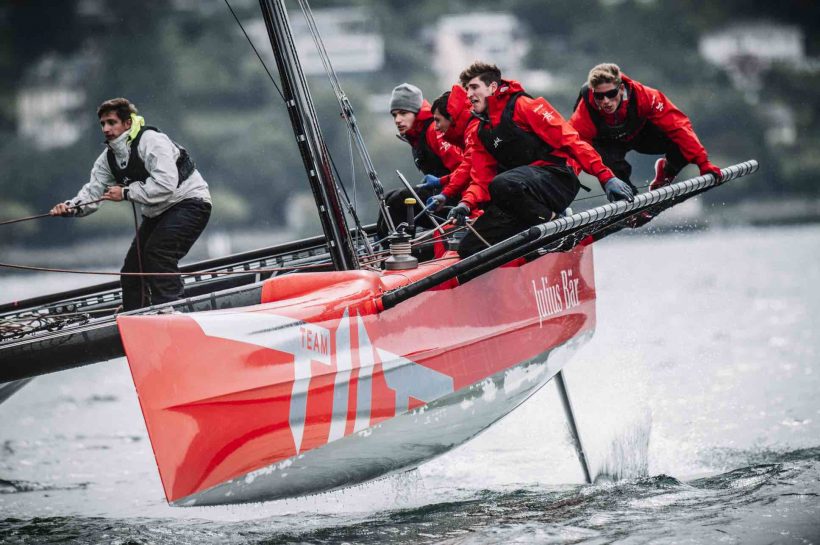 The Team Tilt crew included members of the squad that will race the Red Bull Youth America’s Cup next summer. They claimed victory over Ladycat powered by Spindrift and Alinghi at the Yacht Club de Genève D35 Grand Prix last weekend.

The Team Tilt Decision 35 squad was in ‘Red Bull Youth America’s Cup mode’ last weekend for the penultimate D35 Grand Prix of the season, hosted by the Yacht Club de Genève. With Sebastien Schneiter at the helm, the catamaran was crewed in large part by the youth squad that will race the prestigious Youth America’s Cup event in Bermuda next June.

The Geneva event was the first time that this crew had raced a Decision 35 together, making the result all the more remarkable and strengthening the squad’s third overall on the D35 Trophy season leaderboard.

Finishing the opening day ahead, the Team Tilt crew managed to keep a cool head on Sunday, posting a second, fourth and a first in a nice westerly breeze.

“It was very informative,” said helmsman Sebastien Schneiter. “After the first day, we thought we had probably just been lucky, but we managed to keep cool heads. In the end, it all came down to the final leg of the final race; it was very intense and we went through a number of different emotions in the closing moments of the race!”

Schneiter was assisted for the first time by tactician Guillaume Rigot and the combination was outstanding. “We got on very well; he was very calm and made good decisions. Well done him!

“The connection with the rest of the team was also excellent. We learned a lot over the weekend and it is good to see that we have an excellent base to build on.”

The Geneva victory was Team Tilt’s fourth podium place of the season and the result strengthens their third overall on the D35 Trophy season ranking.

With only two points separating the squad from Alinghi in second place overall, there is everything to play for going into the final D35 event of the season hosted by the Société Nautique de Genève from the 30 September to the 1 October.

This final event will decide the winner of the D35 Trophy 2016.

D35 Trophy – overall results with one event to go