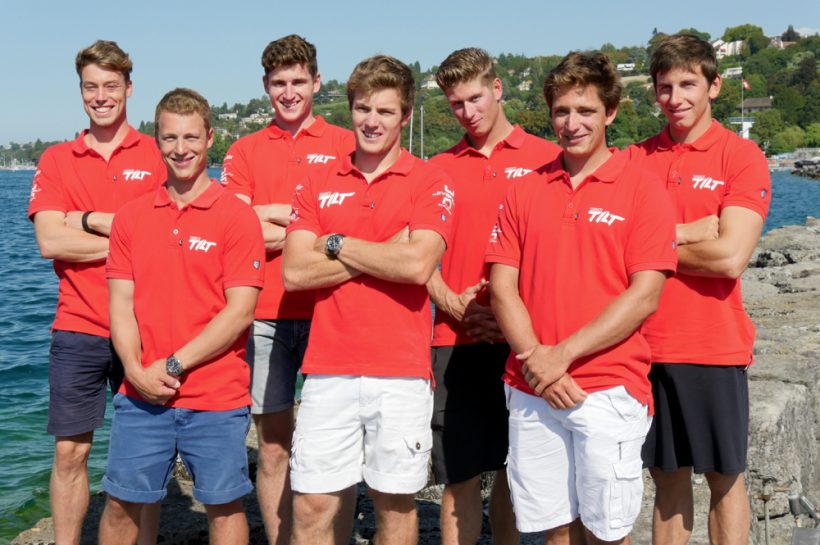 The second edition of the Red Bull Youth America’s Cup is scheduled for June 2017 in Bermuda, home to the 35th America’s Cup. Switzerland’s Team Tilt has the event in its sights and has been preparing for it for several months.

The Swiss youth squad scored an impressive fourth place at the inaugural event in San Francisco in 2013 and plans to improve on this result. The team began a national selection process last spring, receiving 33 applications, of which 16 athletes reached the interview stage. Twelve of these passed the first selection and have been training hard throughout the summer to achieve the objectives set. After an intense two-week session on the Decision 35, the selection committee has now made a final choice of eight athletes and training towards the Red Bull Youth America’s Cup can begin! Organised in parallel to the America’s Cup event in Bermuda, the Youth America’s Cup is exclusive to under 25s and attracts some of the most promising young sailors in the world.

Team Tilt has been active across a number of sailing disciplines this year with Sebastien Schneiter and Lucien Cujean representing Switzerland at the Olympic Games in Rio, finishing an impressive 13th in the 49er Class. In Europe, the team is in third place on the D35 Trophy season ranking and second on the GC32 Racing Tour. Both the D35 and the GC32 will be used as training platforms in the short and medium term to prepare the squad for the flying (foiling) AC45s that the Red Bull Youth America’s Cup will be raced on. To give the team the best possible preparation, Team Tilt partnered with Emirates Team New Zealand, the America’s Cup team representing New Zealand, at the start of the year and has received advice from their famous skipper, Glenn Ashby, throughout this year’s racing.

Fresh from Rio, D35 skipper, Sebastien Schneiter sailed with the candidates for the final selection phase and those that have been chosen will continue to sail on the catamaran for the remaining two Grand Prix events of the D35 Trophy season. They will then move over to the GC32 foiling multihull to train in October – the training programme will be finalised in the coming weeks, but it promises to be intense and in salt water for optimal performance preparation!

Team Tilt has not yet been selected to race the Red Bull Youth America’s Cup; Roman Hagara and Hans-Peter Steinacher, the Double-Olympic medallists in charge of the event, will visit the team this autumn to analyse the squad’s ability. They will give their verdict by the end of 2016.
Tanguy Cariou, sports director : “The candidates sailed on the Decision 35 over the last few weeks with coaches that evaluated their skills and qualities. They also underwent physical tests with the coaches at Sport Quest. Individual skills were of course taken into account, but it is their ability to work as a team that was the most important factor. We want to establish a group of people that is complimentary from a sailing skills, physical and personality point of view, but also a group that can be available to commit to the programme from now until June 2017. The choice of candidates was very difficult, they all demonstrated excellent skills and deserve a place on board. This selection process has provided an opportunity to train a large number of youth sailors, and whether they have been retained or not, they will go on to do very well on the Swiss D35 teams. The squad that we have selected gives us the opportunity to build on the fourth place that we achieved in the 2013 edition of the Red Bull Youth America’s Cup – our ambitious project will be targeting an even better result next time.”

Sébastien Schneiter, skipper : “We did a number of crew rotations on the D35 to test the different crew configurations – it was encouraging to see that despite the changes, our performance did not suffer and we even won a few of the practice races. The final selection of the sailors for the Red Bull Youth America’s Cup Team Tilt squad was very hard to do, it is an honour for me to be the skipper of this team! We now have to work really hard on our physical preparation as the foiling AC45 is going to be a lot more physical than the D35.”
Team Tilt Red Bull Youth America’s Cup – squad

Red Bull Youth America’s Cup 2017 – Bermuda programme
A maximum of 16 teams will be split into 2 groups: A and B. The 4 best of each group will be selected for the final.