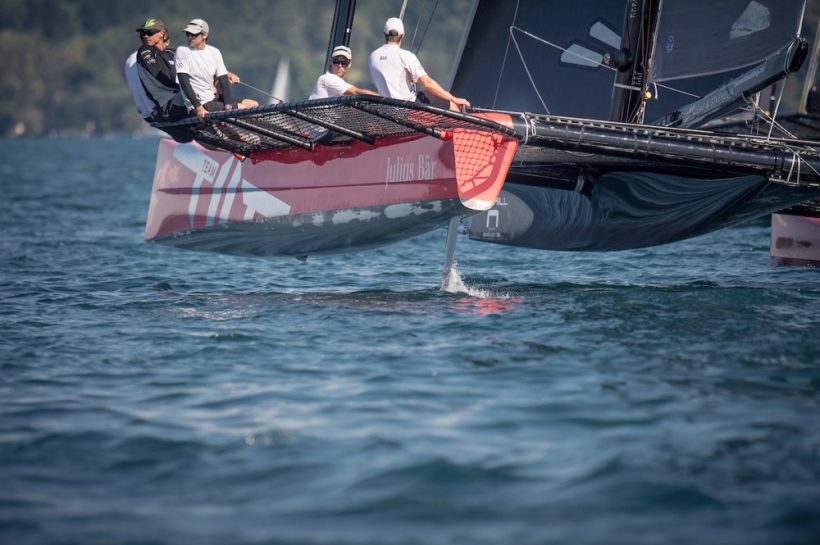 The Decision 35 fleet resumed racing last weekend after the summer break, kicking off the second half of the season with the Grand Prix Alinghi de Crans. A light 6-8 knot breeze over the two-day event produced 10 races and after a hard fought battle the top spot went to Alinghi, followed by Ladycat powered by Spindrift and Team Tilt in third.

Sebastien Schneiter, fresh from the Olympic Games in Rio, took up the Decision 35 helm just a few days before the Grand Prix for some hasty practice before racing got underway.

“As the weekend evolved, we got better and better, Sunday in particular went well; we struggled with our starts on Saturday and made a few strategic mistakes on the final day.

“We had the capacity to do better with the experience that we had on board with Bryan Mettraux, Lucien Cujean and Tanguy Cariou, but nevertheless we are happy with our third place and had an excellent battle with Ladycat and Swisscom!”

For the final two D35 Trophy events remaining this season, the team plans to use the D35 catamaran as a training platform for the 2017 Red Bull Youth America’s Cup squad. Three of them were on board this weekend with Sebastien Schneiter, Arthur Cevey and Jocelyn Keller and in the coming weeks additional crewmembers will join the D35 team to prepare for the Youth AC.

The Team Tilt Red Bull Youth America’s Cup squad will be named in the coming days, but in the meantime, training continues apace from Wednesday.

This third podium finish of the season so far for Team Tilt strengthens their third overall and puts another point between them and Swisscom in fourth place on the season championship leaderboard.

The next D35 Trophy event is at the Yacht Club de Geneve from 16-18 September.