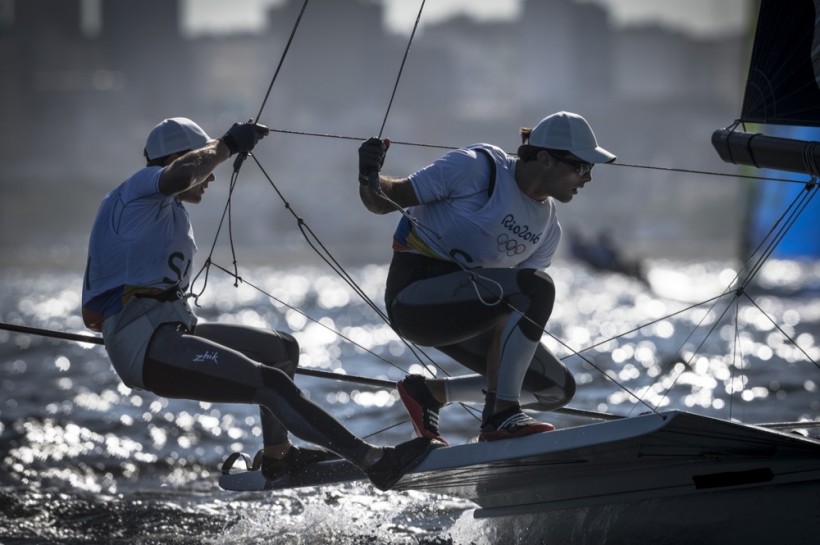 August 21 2016 : the closing ceremony of the 2016 Olympic Games marked the end of the Rio 2016 adventure. Sébastien and Lucien finished their first olympic games, with a great 13th rank overall, in the 49er fleet.

The young team targeted a TOP 15 for their first olympics ; this 13th place overall is very positive for their main objective : Tokyo 2020 !

We’ve spoken to them at the end of their last day racing in Rio, August 16 2016 :
Sébastien : Finishing on such a good day is great for us ! We lead the first race on the first mark, a great feeling. Knowing that we weren’t supposed to take part in these Olympics feels even better. We finished ahead of some very good teams, that were seeking medals, and enter the overall TOP 15. We now have 4 years to improve 10 ranks !

Lucien : We could prepare the little damages we had on the boat from yesterday, and managed doing some nice things on the water today. We had nothing to lose : we sailed properly, without any pressure, and finish with three nice races. Our first objective (TOP15) is clearly satisfied, it’s a great overall result for us. We could fight with the world’s best sailors of our class, our speed was good. We did some tactical mistakes, but we can work on this. We have four years to work on what we learned during these first games, and be more consistent in Tokyo !

Check out Sébastien and Lucien’s video interview, filmed at the end of the games :$