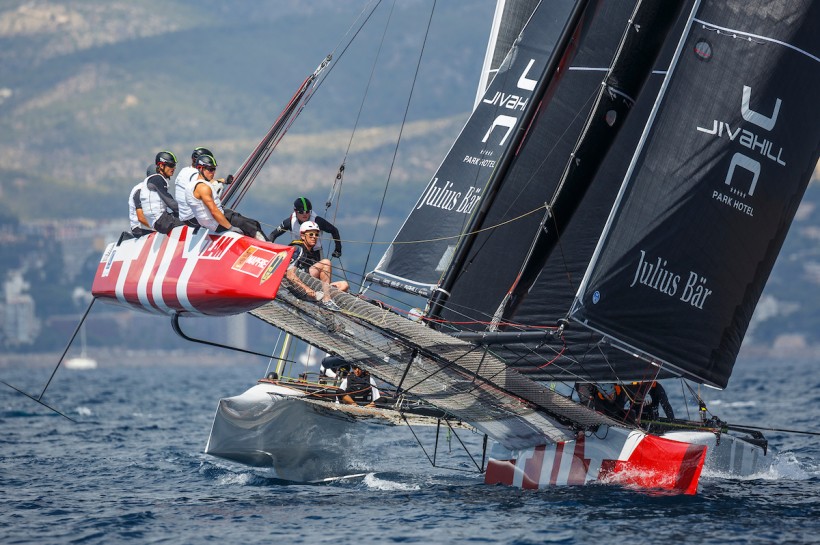 The Swiss GC 32, helmed by Arnaud Psarofaghis, made a brilliant come-back over the past few days and finishes on the podium. Unfortunately, the distance to the leaders was too big after day one.

The devil is in the detail! Due to a marginal technical failure (a broken jib sheet) on day one, Team Tilt’s crew finished race four in the last place. A result that increased the pressure on team members, and surely contributed to a premature start in the next race – under black flag!

« We suddenly ended up seventh in the overall ranking », recalls Tanguy Cariou, the team’s sports Director. « A result that was clearly below our expectations! We then reacted very well, but unfortunately the meteorological conditions and the waves didn’t allow us to complete enough races to catch up. The state of mind of the team was excellent; there was however nothing we could do! »

Indeed, Arnaud Psarofaghis (kindly lent by Alinghi for the GC32 regattas), Glenn Ashby and the rest of the team (identical to the one in Malcesine) won five out of the seven races that took place after day 1. Excellent results that allowed Team Tilt to climb up to third overall, one point behind Armin Strom Sailing Team. Norauto, helmed by kiwi sailor Adam Minoprio, winner of the Copa del Rey, takes the lead in the annual ranking, two points ahead of Team Tilt; needless to say that the rest of the season will be intense!