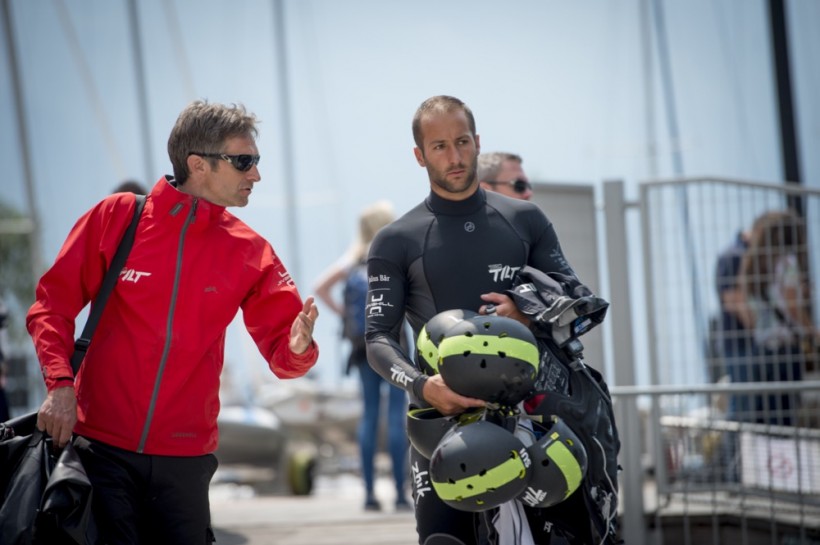 Team Tilt has had an incredible start to the 2016 racing season with three podium results on three different circuits ! On the Decision 35 circuit, the team is making its presence felt on fleet leaders Ladycat and Alinghi posting a win at the Grand Prix de Versoix and a podium finish at the Geneva-Rolle-Geneva; Alex and Sébastien Schneiter have been sharing the role of helmsman with excellent results.

At the GC32 Racing Tour, Team Tilt gave a masterful performance on its first outing on foils finishing second in Riva del Garda. The team is now in Malcesine to sail the second GC32 Racing Tour event of the season, starting on Thursday. While closer to home, the team finished second overall at the Swiss Flying Phantom Series and won the Red Bull Foiling Generation in Geneva ! Last but not least, the Team Tilt 49er duo Sebastien Schneiter and Lucien Cujean received a late call up to go to Rio this summer!

Please read on for more information.

Sebastien and Lucien announced exciting news last week – they have qualified for this summer’s big event and will be travelling to Rio to represent Switzerland!

Swiss Olympic rules prohibit teams, federations or athletes from communicating on the Olympics in association with other sponsors. We favour the visibility of our partners, without whom we would not be here and therefore cannot communicate further about this wonderful news in our newsletter or on our website. We invite you to visit our Facebook page or the Swiss Sailing Team website to learn more about this topic.

News from Brazil will be limited this summer to comply with Swiss Olympic rules. The Olympics will however be widely covered in the Swiss media and they will certainly report on our awesome duo! Meanwhile, we look forward to giving you the back story and news from inside the team in the autumn!

At the beginning of the year, Team Tilt added a GC32 racing machine to its fleet; the 32-foot flying catamaran thrills spectators and gives sailors a huge adrenalin rush! Bryan Mettraux, 25, trimmer on board the GC32 and the D35, tells us about the team’s first outing in Riva del Garda at the end of May.
How did the first GC32 regatta go?
“It’s an amazing place to sail – I thoroughly enjoyed the venue. Our second place was very encouraging but we will have to be vigilant as the rest of the fleet is bound to progress in the coming weeks.”

How did you manage a second place on your first outing?
“We had a very good training regime in place in the lead up to the race and we quickly learned how to manage the boat in high winds during the event. All of this combined to make us go well, plus the atmosphere on the boat was excellent. Glenn Ashby brought a lot of positives to the team and we know our helmsman Arnaud very well – he is very good. But above all, we trust each other.”

What was the biggest challenge?
“Getting the boat back in one piece at the end of each day! We now know what areas we need to work on to avoid the small breakages that we had in Riva. We are ready for Malcesine.”

“It is hard to describe – it is an impressive sensation. You know that you are right on the edge the whole time with a tiny margin for error… That is the difference with a conventional boat, you know that you cannot make a single mistake. On a reach just after the start, when the boats are really close to one another, that is when the tension is at its height!”

What are the objectives for Malcesine?

“To win! Lucien and Sebastien will be replaced by two young team mates and we will do as much as we can to integrate them quickly into the crew and perform well.”

Discover the GC32 through the lens of Christophe Margot and Nicolas Jutzi here: GC32 Riva Cup.

The small hydro foiling two-man Flying Phantom catamaran is giving the Team Tilt squad a lot of pleasure; at just 5.5 metres and 3 metres wide, it is the perfect training platform for the team to learn to fly.

The season kicked off at the beginning of June with the Swiss Flying Phantom Series and the Geneva-Rolle-Geneva at the Yacht Club de Genève. Kristoffer Johnsson was the helmsman, and for the Geneva-Rolle, Grégoire Siegwart was his crew. The duo finished second.

At the Swiss Flying Phantom Series, Kristoffer finished third. “Two podiums in four days wasn’t bad. I was really well supported by Gurvan Bontemps, a Flying Phantom specialist. We did a lot of work together on the boat and now it is up to me to transfer that knowledge back to the rest of our youth squad,” he said.

Up next was the Bol d’Or Mirabaud with a class for small catamarans for the first time. Kristoffer again took up helming duties and was joined by American sailor Jon Tomko as crew. “We were both very at ease on the boat and got an excellent start. We flew well up until Yvoire and at Le Bouveret we were mixing it up with five other catamarans, but by the time we got to Thonon we decided to abandon the race for organisational reasons.”

Sebastien Schneiter raced his first Flying Phantom regatta at the Société Nautique de Genève’s Open des Multicoques, with Grégoire Siegwart as his crew and the pair topped off a busy first half of the year with the Red Bull Foiling Generation regatta.

“We learned a lot last weekend and a win in the final race of the Red Bull event was a big reward. The Flying Phantom is perfect for learning how to foil, even if it is a very technical boat,” said Sebastien.

Please click here to see the results of the Swiss Flying Phantom Series.

Team Tilt won the Red Bull Foiling Generation event in Geneva early July ! Sébastien Schneiter and Grégoire Siegwart qualified for the finals that will be held in October in Newport (USA).

With Tanguy Cariou as sports director, Pietro Sibello as the GC32 coach and Kiwi Glenn Ashby as the GC32 trimmer and internationally renowned ‘super coach’, the young Team Tilt squad is in good hands!

We introduced Tanguy Cariou through our newsletter last year. His management as sports director continues apace:

“I define the sports strategy for the team to be in the best condition to perform,” said the 43-year-old sailor. “Everything has to work in order for us to maintain our performance while integrating young people and developing their skills. I try to take a step back from the project in order to find the right balance.

“We worked hard on getting the GC32 programme in place at the start of the year, including hiring Jimmy Lebaut as boat captain; he brings a wealth of experience with him and the collaboration with Bryan Mettraux has been very successful.

“Pietro is the coach for the GC32 team. He is very well known on the Olympic circuit and is very strong on the technical side. He is doing excellent work with the team.

“For the rest of the season we will integrate young sailors in the team, in particular on the D35 circuit, all the while remaining on the podium I hope! On the GC32, we will try to continue the way we started despite the changes to the crew following Sebastien and Lucien’s call up to go to Rio. And finally, on the 49er, the goal is to gain a maximum of experience with a view to Tokyo!”

Also in the support team: Tom Saunt is doing excellent work with the 49er Olympic team, supported by Simon Hiscocks. And of course, the Team Tilt leader, Alex Schneiter, holds the reins of this great team; he supports, guides and motivates everyone without fail.

The Julius Baer Group has supported Team Tilt with passion and enthusiasm since the very beginning. We talk to Laurent Pellet, Market Head Intermediaries Western Switzerland, Monaco and the Middle East.
What is your view on the Team Tilt performance?

“We admire the number of projects that the team has this season. Despite potential difficulties caused by rapid development, they continue to impress with their excellent results. Their inaugural GC32 race in particular, finishing second against seasoned teams, was impressive. As defender of the D35 Trophy, they are under pressure on Lake Geneva, but we are sure they will rise to the occasion.”

What elements of the project appeal to you the most – the youth sailing, the technology, the speed or the avant-garde boats that they are racing?

“All of the above of course! When we committed to the programme three years ago it was primarily to support a young sailing squad as this corresponds closely to the wishes of Julius Baer to foster young talent. The project has grown with foiling. Team Tilt is a new generation of sailors who are constantly evolving and who learn very quickly to master new technology. This innovative energy, crowned with success, is exemplary.”

Many Julius Baer employees have had the opportunity to sail on board the Decision 35. What was their feedback?

“The sailing is a privilege. Our employees and our guests, sailors and amateurs alike, have all had the immense pleasure of sailing on board the D35. They discovered how powerful these boats are and even had an opportunity to helm. Care and support during such an experience is important and the Team Tilt crew do this with such commitment and with such a desire to share their passion that our guests always come ashore with a huge smile and windswept hair!”
Pictures : Loris von Siebenthal