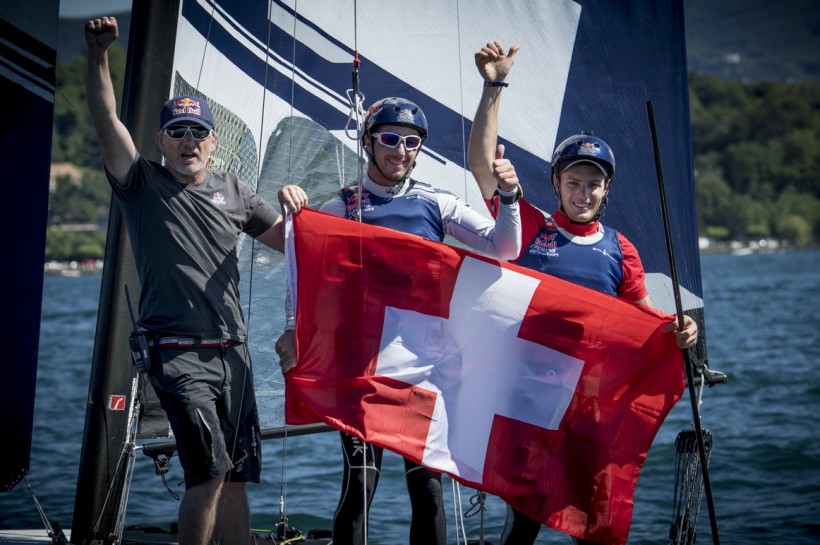 Sebastien Schneiter and his cousin and crewmate Gregoire Siegwart won the Red Bull Foiling Generation this weekend in Geneva, qualifying for the final in October in Newport, USA. This unique event gave 32 young Swiss hopefuls the chance to discover the future of sailing.

The Red Bull Foiling Generation is a unique event that gives young, talented sailors aged between 16 and 20 a taste of the future of sailing on foiling multihulls.

Thirty-two of Switzerland’s best young sailors, including Sebastien Schneiter and his cousin Gregoire Siegwart, gathered on the waters off Geneva for a sailing spectacle like no other, racing the Flying Phantoms at speeds of up to 60km/h.

Conditions varied throughout the week with strong winds at the start of the event and very light airs on the final day on Sunday. Sebastien and Gregoire had a good start and stretched their lead tack by tack, controlling their adversaries – leaving no opening. Having just qualified for the Olympic Games in Rio, Schneiter held strong and delivered a victory.

Second and third place were won by sailors from the Societe Nautique de Geneve’s Sailing Team – respectively by Luvisetto/Peverelli and Rol/Megevand. The sailors demonstrated the quality and diversity of their training and delivered excellent results.

“The starts were very important,” said Sebastien Schneiter. “I really enjoyed the week, the organisation was very professional. My 49er experience helped a lot, but I also learned a huge amount from the world-class coaches that supported us all week.”

Gregoire Siegwart enjoyed sailing with his cousin. “I am also preparing for the Olympic Games, but on the 470 and the 2020 edition,” he said. “This style of sailing, on a catamaran with foils, is very different. It was an amazing experience.”

The Red Bull Foiling Generation circuit is made up of 15 stages over two years at venues all over the world. The final is in Newport in the USA from 21-23 October and Schneiter/Siegwart have qualified. The circuit has given over 400 young sailors, selected based on their ability, a chance to try this style of sailing.

John Craig, the race director, has managed every stage of the Red Bull Foiling Generation. “The level of the young Swiss sailors is excellent, they rank among the best that I have seen so far,” he said. “The winner here in Geneva will have every chance of a good result at the final.”