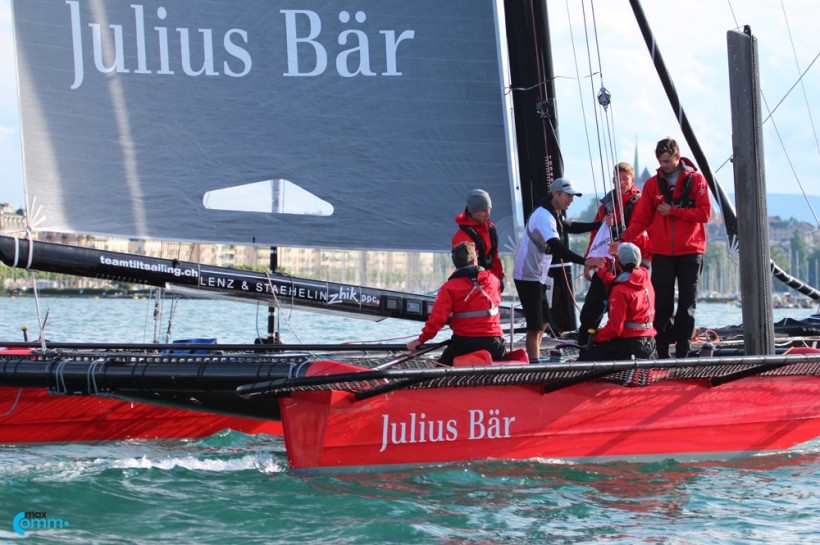 Switzerland’s famous Bol d’Or Mirabaud on Saturday marked the fifth stage of the D35 Trophy and Team Tilt had hoped to repeat last year’s success and win for a second year running. At 10:00 on the 11 June, 520 boats crossed the Societe Nautique de Geneve start line for the season classic.

Team Tilt had a fairly good start. “We were always in the game, but Ladycat was just that little bit better,” said helmsman Alex Schneiter, who was standing in for his son Sebastien. “We rounded the mark in Le Bouveret in fourth place and were sailing well on the return leg to Geneva. By Thonon, we were in the lead group.”

With a third place at the Geneva-Rolle-Geneva the weekend before, the team sponsored by Jiva Hill Park Hotel and Julius Baer, was targeting another podium finish and as Schneiter said, it was a close run thing. “It came down to a few elements in the end: we decided to go offshore on the way back to Geneva while our competition hugged the French coast. They passed us at Yvoire and reached the fresh breeze in the Petit Lac before us and that was that.”

Alex Schneiter had a young, smart crew with him for the fast and wet 8-hour 52-minute race, including: Tanguy Cariou, Bryan Mettraux, Arthur Cevey, Jocelyn Keller and Jeremy Bachelin.

“The team did a great job; I was well supported! And to be lying third on the D35 Trophy leaderboard going into the summer break is great for us. We are two points off Alinghi and have put a few more points between us and fourth place.

“Now it is up to the young team when the season starts again in September, Sebastien will take over helming duties and will race with the young sailors preparing for the Youth America’s Cup in 2017.”

The Team Tilt Flying Phantom was also racing the marathon event as category C1 small catamarans were invited to compete for the first time. Helmed by Kristoffer Jonsson, the Tilt Phantom sailed second in his class almost all race long. More news will be uploaded soon about the end of their regatta !

The Team Tilt squad was busy on all fronts this weekend with Sebastien and Lucien Cujean racing the World Cup in Weymouth – results.

Next up for Team Tilt is the GC32 competition which travels to Malcesine in Italy for the second stage of the GC32 Racing Tour from 7-10 July.