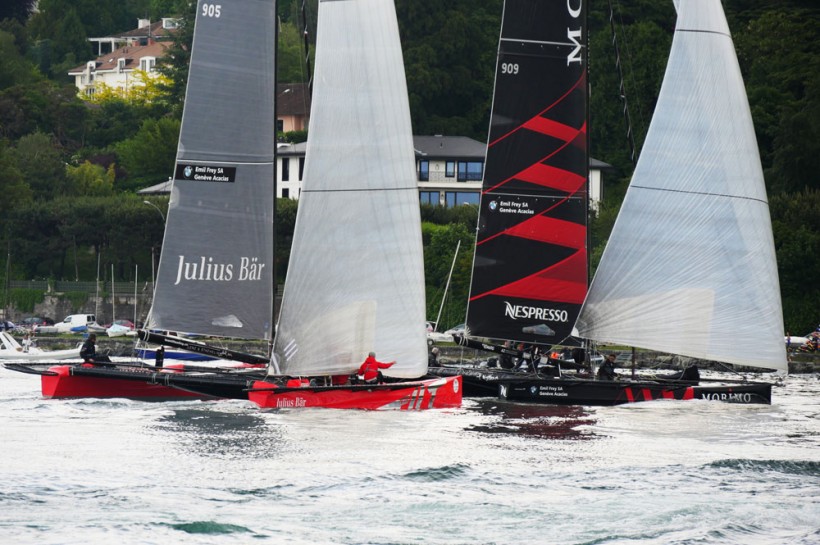 Lake Geneva’s long distance classic, the Geneva-Rolle-Geneva, was a great success on Saturday with perfect conditions for the 232-strong fleet. The winner, Ladycat powered by Spindrift, finished in four hours with Team Tilt’s Decision 35 in third place behind Mobimo.

Team Tilt, helmed by Alex Schneiter, posted a third place overall at the Geneva-Rolle-Geneva on Saturday in Switzerland, an event that plays prelude to next weekend’s Bol d’Or Mirabaud. After an excellent start off the Geneva Yacht Club start line, the team led the 232-strong fleet for the first half of the race.

A steady breeze on the lake made the marathon race a sprint with the winner finishing in four hours. Alex Schneiter, standing in for his son Sebastien who is racing the World Cup in Weymouth on the 49er, helmed Team Tilt for the first time this season and was delighted with their excellent start and tight fought battle with Alinghi and Zen Too.

“We reached the top of the lake much faster than anticipated and the mark rounding in Rolle was complicated by a storm. The wind shifted and the boats that were behind us caught up. The two groups came together again back at the Yacht Club for a very tight finish!

“We are pleased with our third place, especially as we raced in the leading group the whole way. It was an excellent race and a good challenge for me with only two hours training on the D35 before taking up the helm!”

A second Team Tilt crew was out on the water on Saturday on the Flying Phantom racing in the ‘small multihull’ category. Kristoffer Johnsson and Gregoire Siewart finished third in class and were the second Phantom over the line.

On Sunday, the team on the D35 went on to race the second day of the Grand Prix de Versoix posting a seventh place.