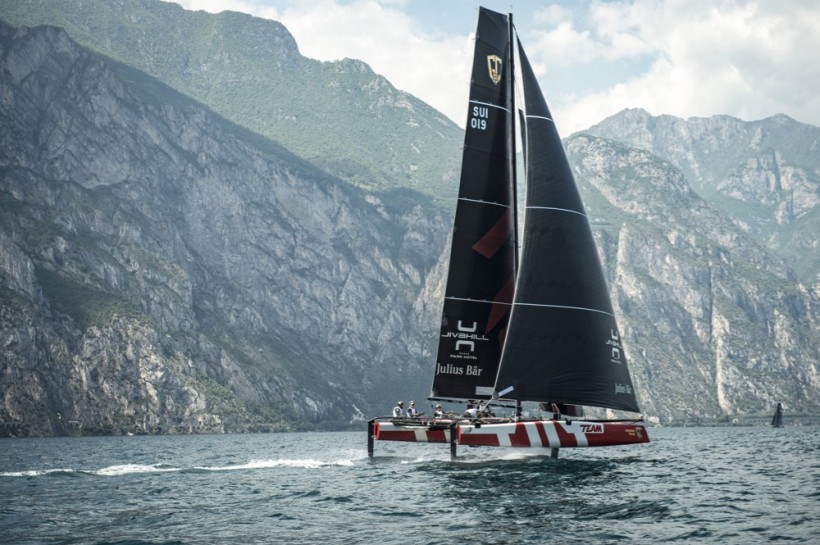 Switzerland’s Team Tilt continues to push the envelope of youth sailing development by moving into foiling for the 2016 season and on day one of the opening event of the GC32 Racing Tour on Lake Garda in Italy, the team, made up of a mix of experts and novices, pulled off a second place on the leaderboard.

Tanguy Cariou and Pietro Sibello are also on site as coaches to the team and Jimmy le Baut is shore crew.

The opening day of the opening event of the season was cause for celebration for the young team as they finished second overall at Riva del Garda in Italy just two points adrift of Franck Cammas and with a healthy 14-point lead over third placed Armin Strom. The team won three out of four races, suffering damage in the last race of the day which cost them the top of the leaderboard.

“We tried to make things fairly simple for ourselves, with clear starts, high speed and good boat handling – something the crew does perfectly,” said helmsman Arnaud Psarofaghis. “Everything happened naturally despite a few technical issues, but that happens sometimes.

“Our opening results are exciting and bode well, but with three days still to go anything can happen; each day is different, we took what we could on day one, we’ll see what day two has in store. The team is exhausted after this opening day, but we are all 100% focussed.”

“I was exhausted after racing,” said skipper Sebastien Schneiter. “Throughout the day the racing got harder and harder as we got physically tired, but from a boat handling point of view, we feel that we measure up well against the other teams. It is a good start for us, but the level will only increase over the next three days – it will be interesting! For the moment though, we are having a good battle with Norauto!”

The coaches were also pleased with the team: “It is good to see the guys sail the boat so well, especially at the opening event,” added Pietro Sibello. “We could see the crew working well together; the experts and novices were gelling. Our boat handling was good and the training we have put in over the past few weeks is paying off. We lost a few places due to some minor damage, but the team handled it well. Seeing them finish ahead of the big name teams is very interesting, we are proud of them.”

Racing on day two kicks off at 1300 for a maximum of six races.