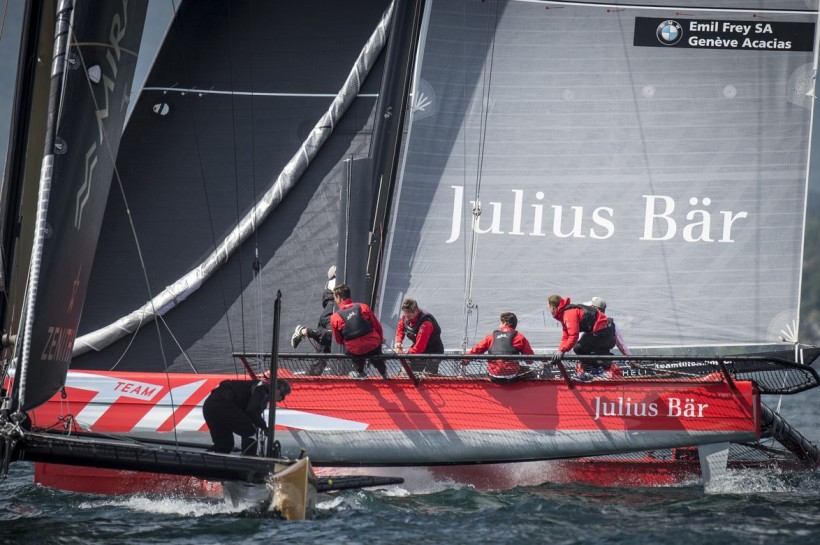 Team Tilt, the 2015 D35 Trophy champion, won the second stage of this year’s series in Versoix this weekend. Racing, organised by the Club Nautique de Versoix, got underway on Saturday in superb conditions for the 10 teams and after nine hard fought races, Team Tilt came out on top on Sunday with Alinghi and Swisscom completing the podium.

“The standard of the fleet is very high, the racing is really engaging and more open than last year,” said helmsman Sebastien Schneiter. “We have a way to go, but this first victory feels good!”

“We did very little training before the start of the season because this series is not our primary objective this year,” added tactician and sports director, Tanguy Cariou. “We are focussed on the GC32, the 49er campaign and the Red Bull Youth America’s Cup selection process.

“We are rotating the crew frequently on the D35 but remain competitive, so that is a good sign! Over the last two years we have managed to put a good system in place and a solid team within which we can integrate youth sailors successfully,” he added.

Next on the agenda for Team Tilt is the first stage of the GC32 Racing Tour on Thursday at Riva del Garda on Lake Garda in Italy. “We have done quite a lot of training on Lake Garda and are feeling comfortable on the GC32,” said Sebastien. “Our boat handling is pretty good and we are really looking forward to this first regatta!”

Sebastien will hand over the helm to his father Alex Schneiter for the following three stages of the D35 Trophy while he is in Weymouth in the UK for the 49er World Championships.