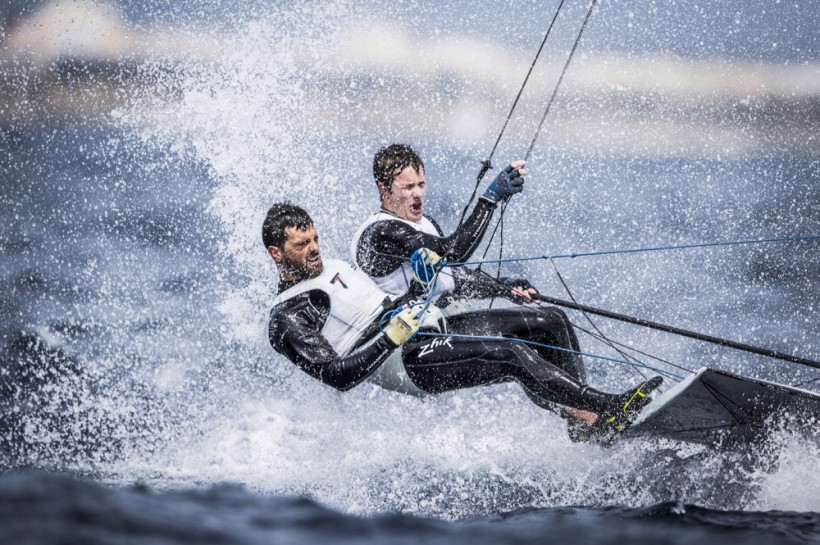 Lucien and Sébastien sailed the Trofeo Princesa Sofia in Palma de Majorca (ESP), from March 28 to April 1. 27th overall, it was one of their best regattas so far. They missed the last european Olympic spot available, conquered by Sweden. There is however an opportunity: Switzerland is the first country on the waiting list. If one of the countries qualified doesn’t send its team, Lucien and Sébastien will go to Rio.

« But we don’t think about this option, as we can’t do anything about it anymore », explains Lucien. « The individual qualification criteria is very difficult to reach in both Sweden and Denmark. In case their teams don’t manage to satisfy it, we have a chance to go to Rio. We will have a better idea after the Europeans and Hyères World Cup.

egarding Palma, we are happy with our performance ; we sailed well in tough conditions. Since the beginning of our olympic campaign, we’ve done our best to try to qualify for Rio, despite our lack of experience on the 49er. We are now starting to be good technically, and will work on our speed over the coming weeks. Sébastien and I will focus on the Europeans, starting April 11 in Barcelona. The level will be high ! »

What are the team’s objective at the Europeans ? « Qualify for the Gold Fleet, and sail against the best sailors in the world », adds Sébastien. « The three first qualifying days will be very important. »

Team Tilt is also involved in other events. Indeed, the other team members worked hard on the GC32 flying catamaran over the past weeks : Tanguy, Arthur and Bryan enabled the boat to be ready for the first training session on Wednesday. « It will be the first time we sail on this boat and I’m very excited! » smiles Sébastien. « It’s good to start on lake Geneva, with light winds. The team will then train on D35 and GC32,. By mid-April, Lucien and I will be back from Barcelona. We will train the whole week on GC32 with Glenn Ashby on Lake Geneva! »

The preparation for the next Red Bull Youth America’s Cup has also began : the first session of physical tests and interviews with young sailors is almost done. « We have met some very good candidates », concludes Sebastien. « We will now do a first selection, and start the training phase onboard the Decision 35. »

An intense season start that doesn’t make our Sports Director Tanguy Cariou’s life easy! It confirms however that Team Tilt is once again at the eve of an exciting sailing season.