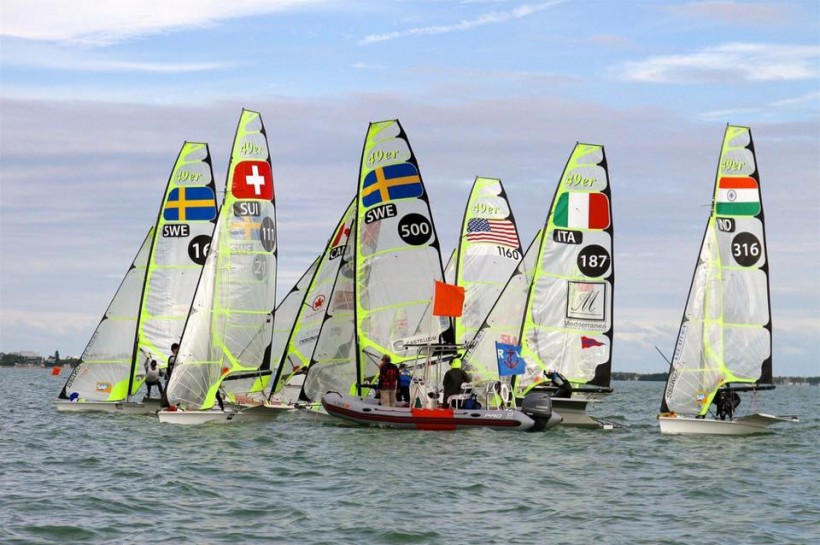 Lucien Cujean and Sébastien Schneiter final goal are the Olympic Games in Tokyo, in 2020. But starting this Olympic year, they set their short terms objectives : Rio 2016 or not ?

« We will be able to answer this question after Palma, at the end of March », explains Lucien. « Of course, we aim for Rio 2016. However, our main goal this year is to get better compared to other teams. Just after the Olympics, very few teams keep on sailing : we have to take this opportunity to take them over. »

Snow has just arrived, but Sébastien Schneiter and Lucien Cujean have already started their sailing season. They headed to Miami for a five week training session on the 49er olympic dinghy, in order to compete in three races : the Midwinter Regatta (16-19 January), the World Cup (25-30 January) and the 49er Worlds in Clearwater (9-14 February).

The team started the season by sailing the Midwinter Regatta at the US Sailing Center in Miami : they ended up 8th/30 boats, equally ranked with 6th and 7th (results). « We were independent, without coach boat as our coach Tom Saunt has just arrived in Miami », tells helmsman Sébastien. « It was challenging to manage the regatta by ourselves. During a three days competition, it’s easier than on a longer event. Not all the teams sailed the Midwinter, but the top fifteen were good ; we are happy with our result. Moreover, it’s our second season sailing the 49er : we have now our points of reference and can compare to 2015. »

Tom Saunt joined the two sailors in Miami, and will work with them on the technical and tactical aspects over the next days. « And on the communication between us, of course », add Lucien & Sébastien. « Our job will then be to validate this work during the World Cup. It’s an important qualifier event for the Americans, but not so important for us. We really use this training session in the USA as preparation ahead of Palma. »

A good start into the season for the sailors, with five weeks abroad. « The atmosphere is really good here, we live with the Laser sailor Guillaume Girod. The weather is not very hot, because of the northern wind. It’s a long time away from home, but we’re now used to being far from our relatives. We will give everything here until February 17 ! »

Alongside the 49er, Team Tilt has a busy calendar this year. The team will use the Decision 35 to train young sailors for the Red Bull Youth America’s Cup, and will start foiling on the GC32. They will have the chance to sail with Glenn Ashby from Emirates Team New Zealand on the GC32 Racing Tour.