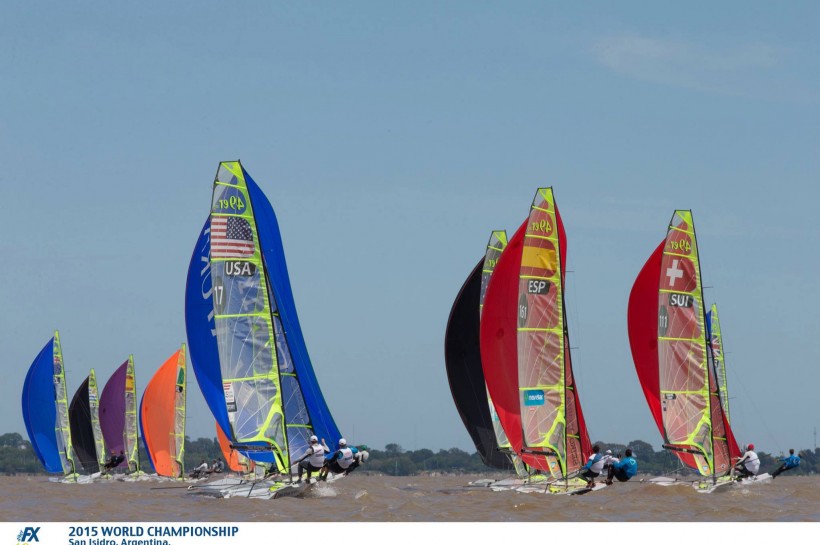 A few days after finishing the season on Lake Geneva – and winning the D35 Trophy 2015 – Team Tilt 49er team flew to Argentina for the 49er Worlds. To get prepared for this event, qualifier for Rio 2016, and discover the difficult sailing venue, Sébastien Schneiter and Lucien Cujean competed in the South American Championship. « We took it as a training regatta ; unfortunately we arrived a few days late, in fact the day before the event », explains helmsman Sebastien Schneiter. « We used this championship to learn as much as possible, and we reached this target. » They finished 40th/53 . Results

The 49er Worlds took place in San Isidro, November 16 to 21. « It was difficult for us to be competitive ; the water pollution made Sebastien very sick », tells Lucien. « We missed some nice opportunities, but it’s part of the game. » Sebastien suffered a serious stomach infection and lost 5 kilos within a few days. Very weakened, he’s getting better and has started eating normally again. « At the end of the Worlds, we could draw interesting conclusions on this season », adds the helmsman. « The improvements on starts and speed are positive. On the other hand, our personal level during the Worlds wasn’t that good. We didn’t organize our season well in terms of peak performance : we feel weaker now at the end of the season than this summer when we were at our best level. In the Olympic world, it’s very important to manage those cycles in order to reach the best level when it matters. »

Lucien and Sébastien are now in Bermuda for the Flying Phantom series final act. Next 49er objective : the Palma regatta in March 2016, the last opportunity to qualify for Rio 2016. « We will train one month in Florida this winter, before going to Palma a few weeks before the regatta. We will train on this venue that we already know well. The Olympic objective is realistic, but we will have to sail at our best level if we want to qualify. The fight for Rio 2016’s last tickets will be hard ! »