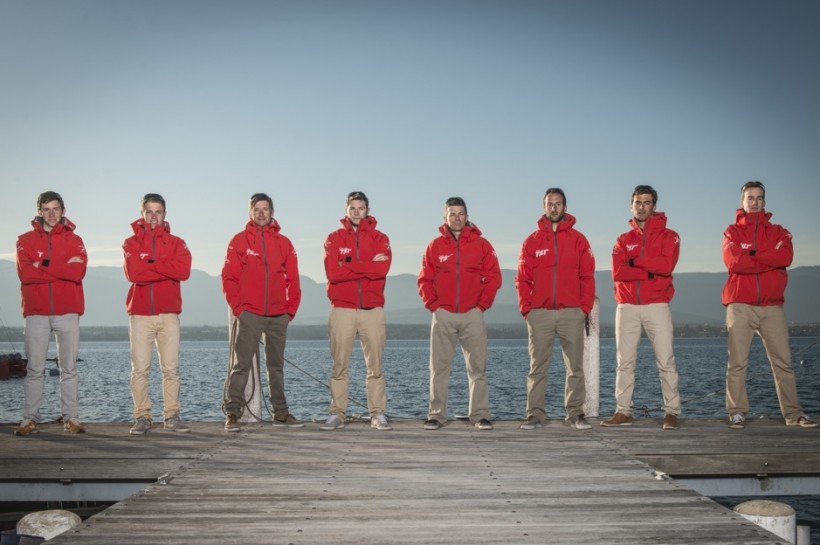 The GC32 Racing Tour announced officially Team Tilt’s participation in the circuit in 2016. The team is also no stranger to foiling catamarans having developed its own boat, Syz & Co, at 10.8m long, a little longer than the GC32. “Foiling is an area we’ve always been very interested in,” says Team Manager Alex Schneiter. “We have done a lot of multihull racing, in particular in the D35s and it is clear that sailing is moving towards foiling.”

One reason they will compete on the GC32 Racing Tour is to nurture young Swiss sailors ready to be part of their Red Bull Youth America’s Cup team in 2017. Given his background, Schneiter is well placed to critique the GC32 which he sailed for the first time on Lake Garda last year. “I was surprised at the speed downwind. I think flying itself isn’t that difficult, but doing the manoeuvres well is quite tricky.”

On the GC32 Racing Tour in 2016, helming will be his 49er Olympic son Sébastien, who skippered Team Tilt to this season’s D35 victories. He will share GC32 helming duties with well-known Swiss catamaran sailor Arnaud Psarofaghis. Team Tilt will be running a squad system and will start the season with what Schneiter describes as their ‘A team’, including multihull veteran Tanguy Cariou and Lucien Cujean, Sébastien Schneiter’s 49er crew, and Bryan Mettraux. Young sailors will be rotated in during the season.

Schneiter says he finds the modified format for the GC32 Racing Tour and its choice of venues attractive. “It is like what we do in the D35s – having the luxury of prioritising the quality of the venues rather than having sponsor issues where you have to go to specific places, which aren’t necessarily the best sailing areas. It looks like the GC32 Racing Tour will have a good group of boats. We know that in 2016 we will be new to the boat so we’ll be coming in quite humble.”

Organizers confirm that a minimum of six teams will be participating, with more due to sign up to the foiling catamaran one design circuit over the winter months. With a season running from May until mid-October, the 2016 GC32 Racing Tour will be held exclusively at southern Europe venues that offer optimum wind conditions in order for the ultra-high speed catamarans to spend as the maximum time foiling. ‘Sun, speed and spectacle’, will be the watch words of 2016 with teams able to offer a VIP experience to their guests in the most beautiful venues. Like previous GC32 seasons, the aim is to remain with four day long events, with modern America’s Cup-style courses with reaching starts and finishes and other race formats tailored to provide maximum enjoyment and thrill factor for crews.