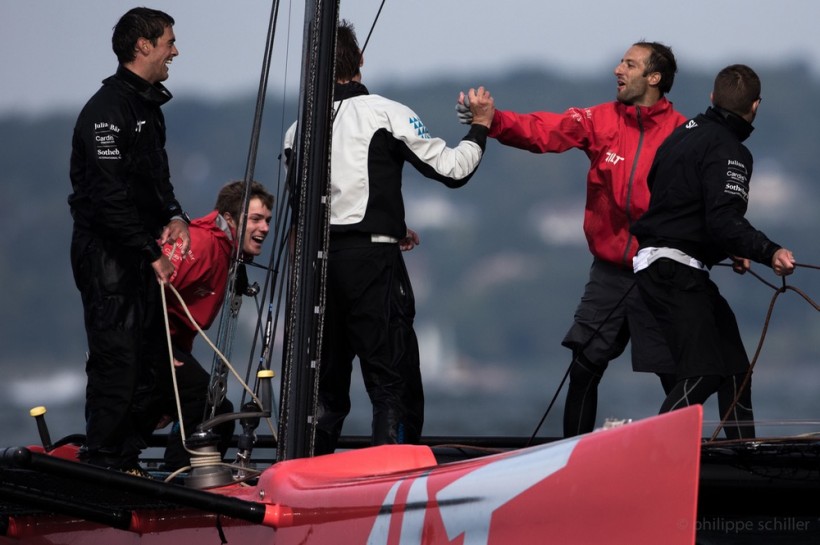 After almost 50 races on the D35, Team Tilt’s victory over Alinghi came down to the last leg of the last race of the last Grand Prix of the season. “We only knew for sure that we were going to win the championship a minute before the end of the final leg. It was very intense!” said Jonas Schagen. “We were very calm throughout the season, everything went well on the boat and the crew really gelled, but there was a lot of pressure on us at that very last event of the year. We had to finish ahead of Alinghi to win the championship, but every leg against them was like climbing Mount Everest. To add to the pressure, on that last leg, we had an issue with furling our Gennaker. Finally, after the last gybe, we realised we had it and the explosion of joy on the boat as we passed the finish line was huge – it was also a huge relief!”

Having won five Grand Prix over the course of the season, including the Bol d’Or Mirabaud in June, Team Tilt almost made a clean sweep of the Championship. “We owe this success to the hard work we put in at the very beginning of the season. We started off the championship with a solid foundation in May and had very good boat speed right out of the blocks,” said bowman and North Sails sail maker, Jonas Schagen. “The atmosphere amongst the crew was excellent, everyone was pulling in the same direction,” he added.

A magnificent season of racing at a very high level against some of the greatest teams in the sport! Ernesto Bertarelli and his team on Alinghi, once again showed their class on the racecourse, racing at an incredibly high level that made the competition all the more interesting!

Photo caption: The team celebrate at the finish of the final Grand Prix of the season / ©Philippe Schiller / myimage.ch

A positive experience at the Rio Olympic test event

Photo caption: Lucien and Sebastien at the Test Event in Rio ©Jesus Renedo

Team Tilt’s 49er Olympic campaign took a step up this summer when Lucien Cujean and Sebastien Schneiter participated in the Olympic Test Event in Rio de Janeiro, Brazil, on the 2016 Olympic racecourse. Having posted an 8th in the Silver fleet at the 49er European Championships in Porto in July and a 10th at the Rio Pre-Test Event, the duo finished 17th out of the top 20 in the world at the actual Test Event in August. They showed their development during the event when they finished 5th in the final race – a good result from a logistics, human and sporting standpoint ahead of the 2016 Olympics. Competition results

After a great experience at the Semaine Olympique Francaise in La Rochelle, France, the next and main objective this year is the World Championship in November as it provides a chance to qualify for the 2016 Olympics, although their expectations are tempered. “It is possible, but almost unreachable for us,” said Lucien. “We are realistic about our performance, but we know that at this level of the sport, anything can happen! In our preferred conditions – 8-12knots – we can be fast, so we may yet have a surprise up our sleeves!”

The recruiting process for the next Red Bull Youth America’s Cup in 2017 has begun. Team Tilt is looking for under 24-year-old sailors who are motivated by an exciting challenge on a demanding boat. The rules have not yet been published, but if they are the same as in 2013, then youth sailors born after 1994 qualify. Being available is key to this project as well as a strong sailing background. Candidates from all over Switzerland are invited to contact us at teamtilt.youthamericascup@gmail.com for a chance to represent Switzerland at one of the greatest sailing events in the world.

Sports director, Tanguy Cariou, will manage the recruitment process throughout the winter, ahead of a second phase of tests in 2016. The boat and the structure of this event are still unknown, but flying boats in Bermuda are guaranteed!

End of the season for the Flying Phantoms in Bermuda

Team Tilt will close 2015 with the final Flying Phantom event of the year hosted by the Royal Bermuda Yacht Club, where 15 flying catamarans will come together from the 29 November to the 2 December. Although Alex Schneiter and Christopher Johnson raced the boat in June on Lake Geneva, they will hand over the reins to Sebastien Schneiter and Lucien Cujean for the final event. “We are delighted to have the opportunity to discover the world of Flying Phantoms,” said Sebastien. “Mastering this boat is a real advantage for the future, for all the flying multihulls that we will sail. It will also be a great opportunity to sail on the same waters that will host the Red Bull Youth America’s Cup in 2017.” After the event, the Tilt Flying Phantom will return to the lake to be used as a foiling training platform.

Photo caption: Maud at the Test Event in Rio ©MaxComm

Maud Jayet, who sails out of the Club Nautique de Pully, will wear Team Tilt colours for her Laser Radial Olympic campaign. Maud is the best in the Laser Radial class in Switzerland and is training towards qualification for the 2016 Games in Rio with a long-term objective for Tokyo 2020. “I am really happy to join Team Tilt, it is an excellent project,” said the 19-year-old sailor from Vaud. “I will have the opportunity to exchange ideas with a young group of sailors that are not all on the Olympic circuit. It will be very interesting and I will also benefit greatly from the professional structure that Team Tilt has in place, including having access to the sports director, Tanguy Cariou.”

Alex Schneiter welcomed her to the team: “Maud is a talented sailor who already has an impressive scoreboard on the Laser Radial and at international level; her enthusiasm, talent and commitment to a job well done fits perfectly with Team Tilt’s strategy. The objective is of course to help her take the next step in her Olympic campaign and to give her what she needs to fulfil her ambitions, goals and Olympic dreams!”

Team Tilt to sail a GC32

Team Tilt has already started to master the Moth and the Flying Phantom and they plan to add the GC32 to their fleet next year. This new platform will allow them to train on a foiling platform ahead of the next Red Bull Youth America’s Cup. To begin with it will be exclusively for training, but by the summer of 2016, Team Tilt plans to race the new GC32 circuit. The boats will also be the platform for the Extreme Sailing Series, but Team Tilt will focus on the GC32 circuit. The 10-metre catamaran is the brainchild of Frenchman Laurent Lenne and was designed by Dr Martin; it is a miniature version of what was used for the last America’s Cup. “The whole team is looking forward to discovering this new and impressive boat,” said Alex Schneiter. “It is the perfect boat to teach our young team to fly, alongside the Flying Phantom that we already have.”

– What do you think of Team Tilt’s 2015 season?
Team Tilt had a magnificent season. They led the D35 Trophy from the opening event and held on to their lead for almost all of the summer keeping the best to last with a suspense filled grand finale. The highlight of the year was the Bol d’Or Mirabaud victory; it was wonderful to see such a young team winning this mythical trophy. We were very proud of them.

– What are the success factors of this young team?
The success of a team develops through work and through cohesion and of course depends on individual talent. Youth and enthusiasm are undeniable assets, but it is also thanks to the excellent leadership they have and to the support of Alex Schneiter that the team is progressing and can use its very high potential at the highest level.

– Why does Julius Baer support Team Tilt?
We jumped at supporting Team Tilt three years ago when they were competing for the Red Bull Youth America’s Cup. The project perfectly reflects two of our key approaches at Julius Baer: The first is supporting young talent as part of a partnership; for example, we support the young Verbier Festival Academy musicians. The second is our ‘Next Generation’ initiative that identifies trends such as ecological balance and technological progress. Sailing embodies these two areas. And in addition to this, the Team Tilt sailors love to share their passion, we appreciate this every time we organise a visit for guests of our bank.

The prestigious offices of Lenz & Staehelin have supported Team Tilt since the beginning of the project. Francois Rayroux, who is passionate about sailing, has personally supported the team as legal advisor since the Youth America’s Cup out of friendship for Alex Schneiter. The project has grown since then and so has the partnership; there are currently several members of Lenz & Staehelin staff supporting Team Tilt and as such, they have been named official partner. “We support Team Tilt with legal risk management and governance. Our objective is to protect the team and its members,” explained Francois Rayroux. “It is a project that motivates my team and generates a lot of enthusiasm amongst our employees. Our young trainees and employees invest themselves fully in this project that they can relate to.”

Liburn Mehmetaj, 24-years-old, is one such example. She has been working on the project since 2012. “It was my first file and the project has progressed and developed a lot since then. It is a very complete dossier and very interesting for us.” Liburn works on the Team Tilt dossier alongside several other colleagues, including Andreas Conus.