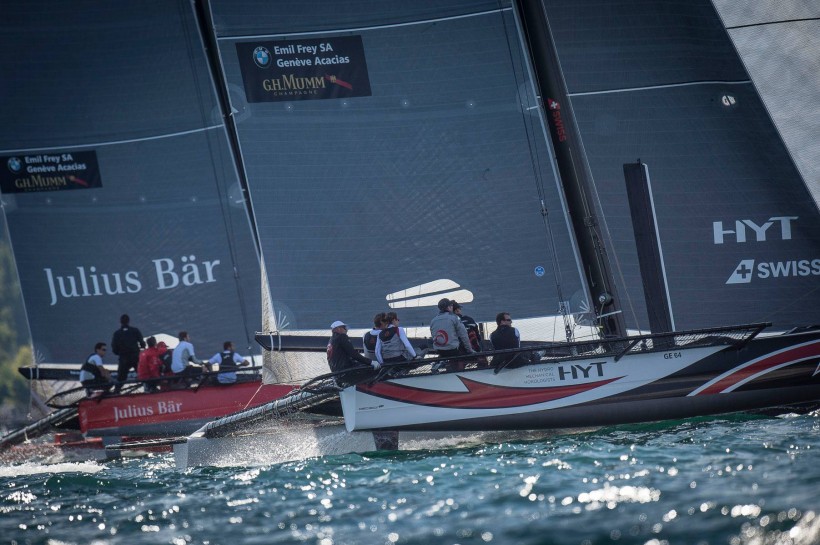 Team Tilt continues to post top results as the Decision 35 Championship on Lake Geneva resumes. Competition was at its height amongst the fleet over the weekend and the Team Tilt sailors Sebastien Schneiter and Lucien Cujean – fresh from the Rio de Janeiro Olympic test event – along with Arnaud Psarofaghis, Tanguy Cariou, Bryan Mettraux and Jonas Schagen notched up a second place at the Open behind Alinghi, managing to hold on to their three point lead on the overall season leaderboard.

Saturday’s strong winds saw Ylliam capsize and reduced competition to just three races, while Sunday was a classic lake sailing day with relatively unstable conditions that saw Alinghi take the lead and fight back on the overall ranking.

“It is clear that the end of the D35 season is going to be hard fought,” said Sebastien Schneiter who was at the helm for Team Tilt over the weekend. “Overall we are very pleased with our performance; the conditions were very irregular and there were traps to avoid. However we lost sight of the overall championship a bit during this event and had two average races, finishing fifth, that allowed Alinghi to come back at us.”

The two leading teams are just three points apart on the season leaderboard. “The race is on between Alinghi and us for the overall, “ said Schneiter. “For the moment, we are each racing our own race, but we will see how that evolves at the coming events…”

With two regattas remaining to decide the season champion, the Grand Prix Alinghi from 12-13 September in Crans and the closing event at the Société Nautique de Genève from 25-26 September, will be pivotal.