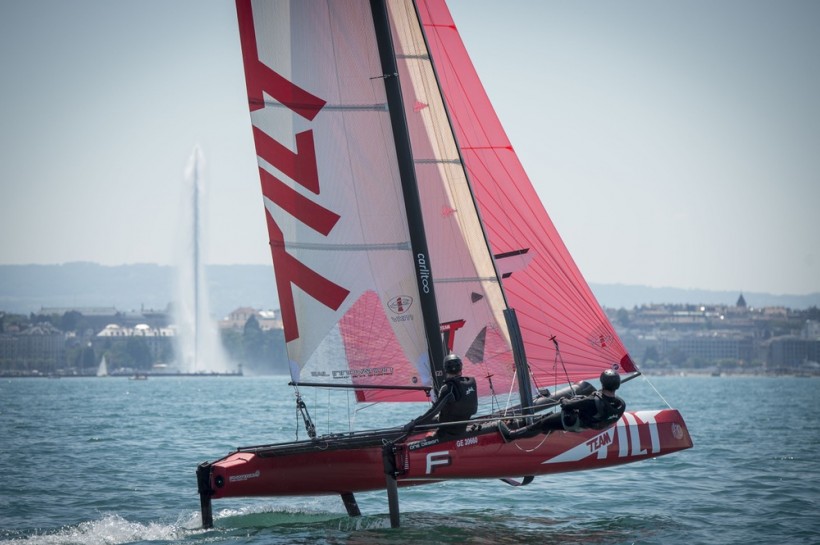 A golden bowl for Team Tilt

Twelve hours, five minutes and 58 seconds is the time it took Team Tilt to race the length of Lake Geneva and back to win the celebrated Swiss Bol d’Or Mirabaud. The final moments of the race were nail-biting with Alinghi and Team Tilt locked into a battle for first place, but it was helmsman Sebastien Schneiter and his crew who snatched the win, just 16 seconds ahead. The crew included Arnaud Psarofaghis, Tanguy Cariou, Lucien Cujean, Bryan Mettraux and Alex Schneiter, who having won the Bol d’Or several times over the years, stepped on board to support the team for the race. “My lasting memory of this race was how talented the young Team Tilt sailors are, they were truly impressive.

“It was very interesting to race with them and to see how they interact, I gave them my insight on the race and the lake, but I am convinced that they would have done just as well without me! I haven’t planned to sail with them again because the overriding objective of the team is youth development. Having said that, if they ever need a stand in, I will be the first to volunteer!”

Tactician Tanguy Cariou was also onboard for the Bol d’Or to lend his experience to the group: “We sailed well and were focused throughout the whole race. We had a good start and raced at the front of the fleet, taking an opportunity to pass them during a squall. The storm was good for the team, it gave us all an adrenalin boost!”

“The first victories of the season really strengthened the crew’s confidence and made them better. This year Team Tilt is in winning mode. Like Alinghi. If the team has an issue, it doesn’t win. If all goes smoothly, it wins, unlike other teams that work the other way round. The team is the second major project to come off Lake Geneva – it is well structured with a coach, a communications process, a sports director and in particular an impressive pool of sailors. In my opinion, that is Team Tilt’s strength and it really showed during the Bol d’Or where you had several sailors able to stand in for Sebastien on the helm.

“I was wondering how such talented people would react to not being appointed helmsman, Lucien Cujean for example or Arnaud Psarofaghis, who is one of the most talented helms on the lake. But they were a united and strong team regardless of roles on board. They also demonstrated the necessary maturity to operate as a team. Team Tilt has a cohesion that Tanguy Cariou contributes to by efficiently channelling the youthful energy of the crew in the right direction.

“I have raced many Bol d’Ors with my friend Alex Schneiter and I know how serious he is about this project, his dedication to youth development is impressive and his determination to develop Swiss sailing is extraordinary. I am proud to be able to support the project with Cardis Immobilier | Sotheby’s International Realty. I am confident that they will do well for the rest of the season and I wish them luck.”

Four wins out of five events on the D35 Trophy circuit so far this year – not a bad start! We talk to Tanguy Cariou, tactician and sports director, about the season at the halfway mark:

What strategy is in place that is generating such good results?
TC: We worked hard over the winter analysing 2014 and focussed on the planning and the crew rotation around Sebastien and Lucien’s 49er sailing. It has worked really well and the results have followed. We have won races with different helmsmen, which is very encouraging for the team.

How did you manage the marathon races with a young team?
TC: We won the first two Grand Prix events, which boosted our confidence on this sort of course. I was a bit worried about the longer races, I wasn’t sure the crew would be able to stay focussed for such long periods, but our disappointment in coming 4th at the Geneva-Rolle-Geneva after having lead for most of the race, meant we could prepare well for the Bol d’Or.

How do you manage your dual role, one on the boat and one ashore?
TC: I am tactician on the Decision 35 and sports director for the global Team Tilt project. It is an easy role as the crew is motivated, talented and very keen to learn. It also has its challenges due to their lack of experience and individual characters. My goal is to get the best out of each of the sailors, they have everything they need to achieve, but they still need guidance. A big part of my job happens ashore, the on water side of my role is simple, all I have to do is execute the plan. It is an absorbing job but very rewarding, especially when we do well.
Foiling, Olympics and the America’s Cup, Team Tilt is involved in all areas of our sport

Team Tilt took flight and joined the ranks of foiling crews at the Flying Phantom Series in Geneva at the beginning of June. As this event clashed with a Decision 35 event, Alex Schneiter and Christophe Johnson took part. “Sailing a Flying Phantom is an amazing experience, even if we are just learning to fly,” said Alex Schneiter. “We will include this platform as part of our Youth America’s Cup 2017 training which will now also be on foils. We are also considering another Team Tilt foiling project in order to best prepare for the Cup and in the meantime the crew is regularly sailing the Flying Phantom.”

The first phase of Youth America’s Cup recruitment begins this summer and Tanguy Cariou will invite candidates to sail on the Decision 35 in order to evaluate their ability to integrate with the Team Tilt crew.

In parallel to the intense lake programme, Sebastien Schneiter and Lucien Cujean continue to work on their Olympic project – the two sailors have made considerable progress on the 49er, racing in the Gold fleet at the Delta Lloyd Regatta in Medemblik, Holland, at the end of May, for the first time. They finished 24th out of 56 teams and won two races in a row, showing their ability to beat elite world class teams. They qualified for the World Cup in Weymouth in the UK, but chose to train rather than compete. This summer, the duo will race the European Championships in Porto, Portugal, in July followed by the test event in Rio in August.

Team Tilt’s success on the Decision 35 is in large part due to the boat preparation ashore. Jonathan Merlet is in charge of this area and has been in the role since the beginning of the season. The 33-year-old Breton is a boat builder by trade, but has also been a sailing school instructor and master sail maker in his time. He also spent five years working at the Decision Boat Yard in Ecublens until 2014. “I discovered this role through Team Tilt and it is a job that suits my skill set as a sailor and a boat builder,” he said. “The team contributes to preparing the boat, they know what they want. Bryan Mettraux has a very important technical role within the project; he knows the Decision 35s very well and helps me a lot. I am very pleased with the work that we did last winter, at the halfway point of the season, the results are still good, and we haven’t had a single technical issue.”

As well as preparing the boat, Jonathan accompanies the team on the water during their training sessions. “I follow them with the RIB and occasionally sail with them in order to optimise the systems. I really enjoy working with such a competent and agreeable group and am incredibly proud of their results!”