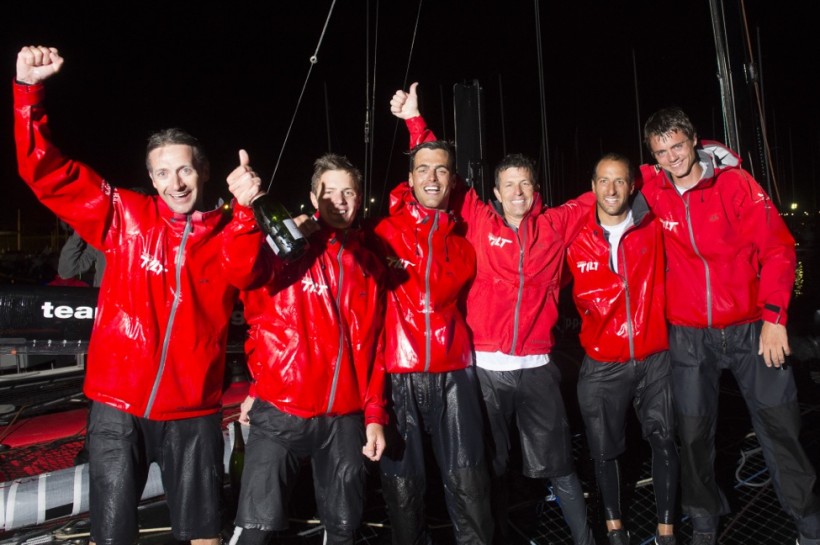 Team Tilt won Switzerland’s celebrated Bol d’Or Mirabaud on Saturday after 12 hours 5 minutes and 58 seconds of racing in conditions that varied from light at the start to hair raising in the final hours with storms sweeping the fleet back to the Société Nautique de Genève. The closing moments of the race saw Alinghi and Team Tilt locked into a fierce gybing dual, but the young crew on Team Tilt, with 19-year-old Sebastien Schneiter at the helm, held their nerve and their lead to finish ahead.

Ladycat led off the start line at 1000, but Team Tilt reeled them in and by Versoix were sitting in second place. With the French side of the lake favoured, Team Tilt and Realteam found themselves locked in a battle all the way to the halfway mark in Le Bouveret where Team Tilt rounded in second place. The French side was also favoured on the way back to Geneva and conditions turned stormy with 30-knot gusts battering the fleet. Sebastien Schneiter and his young crew kept their heads and passed Okalys just off Yvoire to take the lead, holding it all the way to the finish.

The team was made up of Sebastien Schneiter, Arnaud Psarofaghis, Tanguy Cariou, Lucien Cujean, Bryan Mettraux and Alex Schneiter. Helmsman, Sebastien was delighted with the result: “It was a huge relief to finish first, Alinghi caught up with us right at the finish and we only beat them by a few metres!

“The race was a massive game of snakes and ladders, but we managed to stay in the leading group throughout. Arnaud and I shared helming duties to avoid fatiguing. During manoeuvres we each had our own role, which worked well. We managed to catch Okalys with boat speed alone! I think we were willing to push the boat to the max – maybe that’s down to our age, who knows…” he said joking. “After a very slow start to the race, it got more exciting in the squalls which suited us and we managed to get the better of our competitors.”

So far Team Tilt’s 2015 season has been flawless and this latest victory reinforces their position at the top of the Decision 35 Trophy leaderboard.