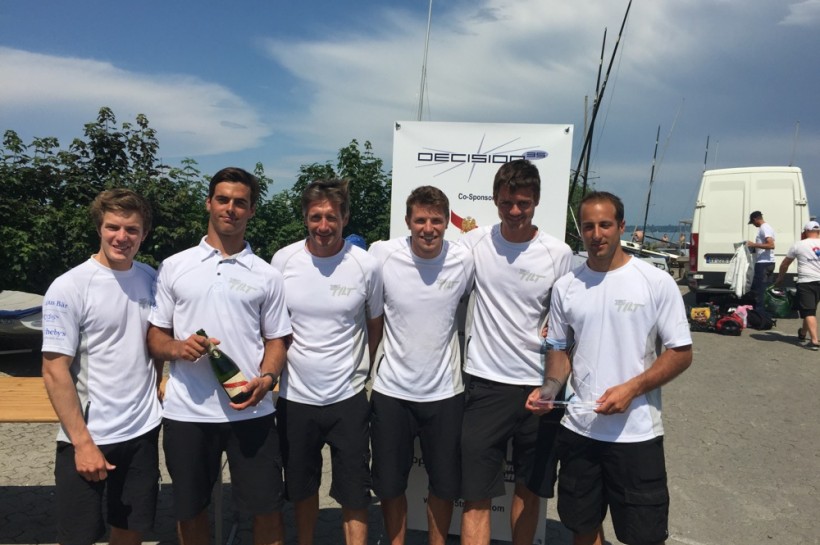 Team Tilt seized a third Decision 35 victory on Lake Geneva over the weekend when the young squad, led by Sébastien Schneiter, added the Open de Versoix 2 Grand Prix to its trophy cabinet, beating class veterans Alinghi and Okalys in what ended up being a six race event, when Sunday’s racing was cancelled due to no wind.

On Saturday, the 11 Decision 35s raced the Geneva-Rolle-Geneva, the first long distance race of the season and a prelude to next weekend’s Bol d’Or Mirabaud. Team Tilt led the fleet for the first half of the race, but multiple lead changes on the home straight saw them finish 4th overall after six and a half hours of racing.

“It was a very busy weekend with two Decision 35 stages and therefore double the amount of points on offer than a normal grand prix weekend,” said Tanguy Cariou, tactician on board. “We managed Friday pretty well, we made a few mistakes, but managed to come out on top as the other teams made a few more than us.

“On Saturday at the Geneva-Rolle-Geneva, our start wasn’t great, but we sailed well until Yvoire on the way back. Unfortunately the weather favoured the other teams in the final hours of the race and we were passed at the finish line. That was a bit frustrating, as we had led the whole race, but in general we were happy with the way we sailed, everything went very well on board. The weather conditions did not follow the usual pattern, it was a fairly complicated situation, but we finished just behind Alinghi, our closest competitor for the Decision 35 title.

“We both gained the same amount of points for the Open de Versoix 2 and the Geneva-Rolle-Geneva, so there is no change on the leaderboard thankfully!”

Team Tilt remains at the top of the D35 Trophy ranking, ahead of Alinghi going into the Societe Nautique de Genève’s famous Bol d’Or Mirabaud on 13 June. The squad plans two training sessions this week with a new crew configuration: Alex Schneiter will step in for Jonas Schagen, bringing his experience of the event to the team and Sébastien Schneiter and Arnaud Psarofaghis will share helming duties.