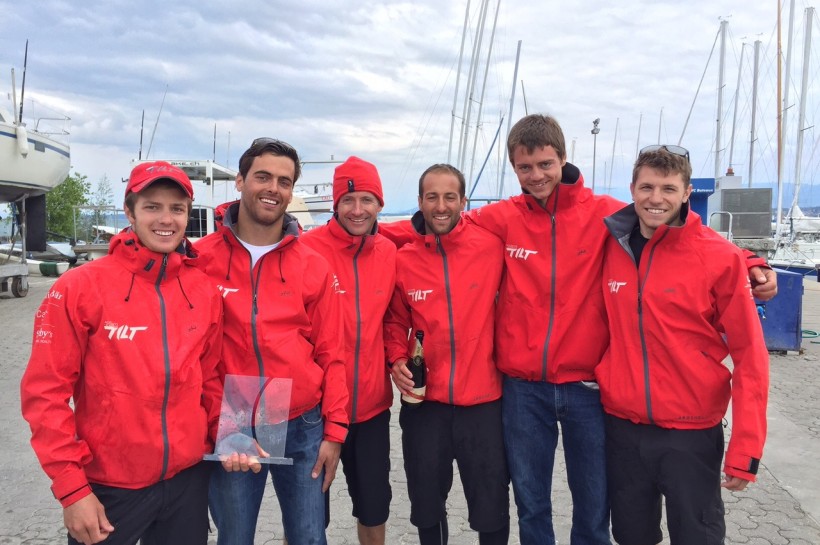 The Team Tilt squad confirmed their early form with another resounding win at the second meet of the Decision 35 class in Versoix yesterday, beating Realteam and Alinghi to the top step of the podium. With Sébastien Schneiter at the helm, the young crew gave no quarter, finishing the weekend with a comfortable eight-point lead. Schneiter is the youngest helmsman in the history of the class to win a Grand Prix.

“We tried to sail as simply as possible, avoided complex situations and focussed on boat speed,” Schneiter explained. “Thanks to this approach, we managed to stay away from risky situations, could sail our own course and make our own tactical decisions.”

When Sébastien is not sailing the D35, he is focussed on an Olympic Campaign and training on the 49er towards the 2020 Tokyo Games with Lucien Cujean. The transition from the 49er to the D35 has been seamless. “There are a lot of similarities between the two boats that make the transition from one to the other quite easy, the sailing angles for example are similar, as is the speed and length of the courses. I have had no problem adapting,” said Schneiter. “I would even go so far as to say that the D35 is easier because there is a tactician to tell me where to go, someone who is responsible for the performance… The 49er is very unstable and I have to do the tactics with Lucien, I also have to tune the boat…it is a very demanding platform.”

Arnaud Psarofaghis, who was trimming the mainsail and in charge of performance for the Open de Versoix, underlined the depth of ability of the Team Tilt Decision 35 squad. “The result shows how multifaceted our team is. Last year, Lucien Cujean helmed the D35 and won the Open de Crans, I helmed two weeks ago at the opening event of the season and we won and now Sebastien has added another win as helmsman. We have three very capable drivers, all able to win races, which is very good for the team. Our season is looking good so far!”

Schneiter added his take: “We compliment each other well, and we can rotate the crew without a problem, every crewmember has a global understanding of the boat which is an excellent strength to have.”

Conditions for the Versoix leg of the Decision 35 Trophy were superb with a 10-18 knot breeze that allowed for six races over the weekend.

Up next on the circuit is the Open de Versoix 2 and then the Geneva-Rolle-Geneva from the 5 to 7 June.