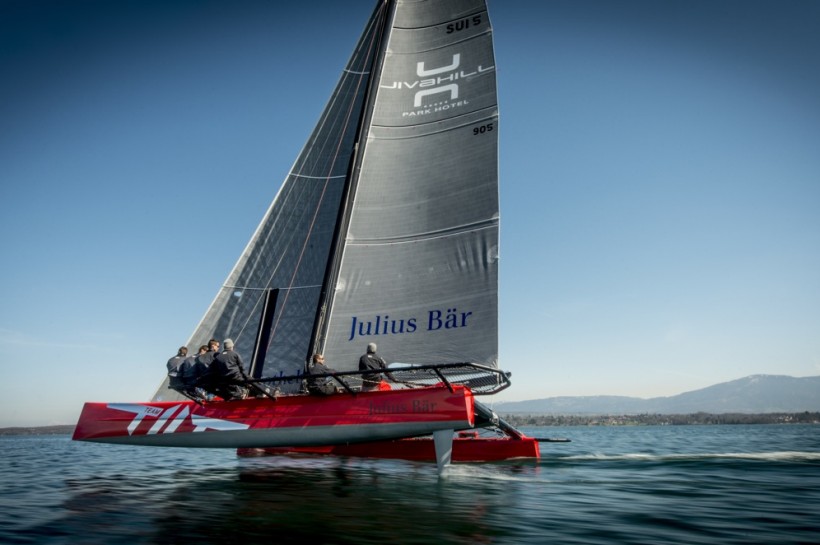 2015 is to be a busy year for Swiss sailing programme Team Tilt with a Decision 35 campaign on Lake Geneva and an Olympic 49er campaign hotting up. In parallel the squad will also be gearing up for the 2017 edition of the Youth America’s Cup.

Team Tilt provides structure and support to young Swiss sailors and the 2015 squad has a busy season ahead starting with the Decision 35 Trophy on Lake Geneva that kicks off on the 8 May. Two new crewmembers join the line up for this competitive series and the performance bar is set high as the young squad seeks a podium finish.

“We worked hard on the boat over the winter and started our training early, we have managed to get some good time on the water since the beginning of the year,” said Tanguy Cariou, sports director and tactician. “I have confidence in our team, they have come a long way since last year. When you are aged between 19 and 26 years old, one more year of experience makes a big difference!”

Arnaud Psarofaghis, 26, and Bryan Mettraux, 23, both talented young Swiss sailors, will join the original 2014 squad on the D35. Sébastien Schneiter, 19, will steer, becoming the youngest ever helm on the circuit. “This is part of his preparation towards the Youth America’s Cup selections that will take place in Bermuda in 2017,” said Alex Schneiter, team manager.

Team Tilt has already begun the process of spotting potential youth sailors for this major event on the international sailing calendar and the squad has bought a Flying Phantom, a small foiling multihull, to familiarise the crew with the concept of flying above the water.

Arnaud Psarofaghis will stand in for Sébastien Schneiter when he is busy with Olympic commitments alongside his 49er partner Lucien Cujean. “They are making good progress and are getting closer to achieving some good results,” said Alex Schneiter. “As members of the Swiss Sailing Team, they will compete at the Rio test event this summer, the official pre-Olympic event, but their target remains the Tokyo Olympic Games in 2020.”

The 49er duo’s key objectives for 2015 are the European Championships in Portugal in July and the World Championships in Argentina in November. On the Lake, Decision 35 action gets underway from the 8-10 May at the Société Nautique de Genève.