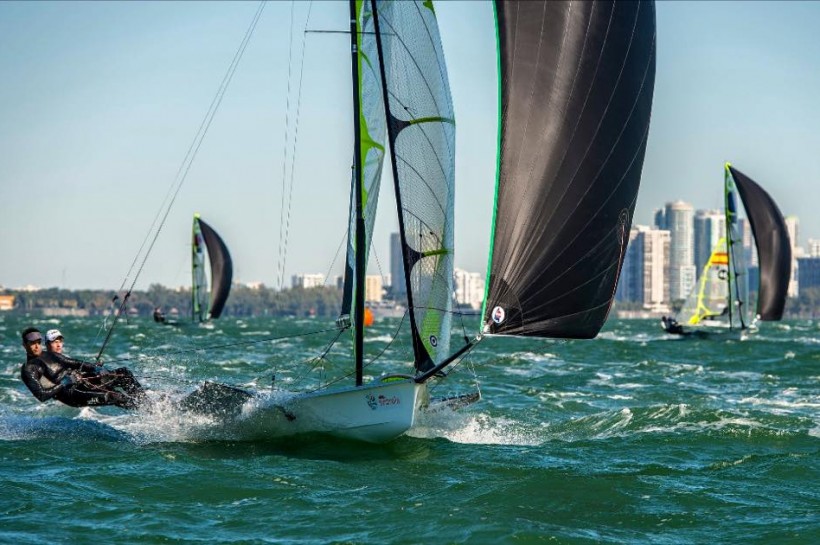 Sébastien Schneiter and Lucien Cujean travelled to Miami (USA) for the start of the 2015 racing season. No holidays planned for the 49er team: they settled in Miami to get prepared for the ISAF World Cup.

After a few days of training, the team took part in the Midwinter Regatta, finishing 27th (results). A good practice ahead of the ISAF World Cup, that was held January 25-31.

« The regatta was very good, we had excellent conditions  », explained helmsman Sébastien Schneiter. « We had several targets, including improving the starting phase. It is very important to be static as long as possible, very close to the starting line. 49er starting lines are very small, and boats tend to stay as close as possible to it, two minutes before the start. We also worked on several other adjustments. Objective reached as our speed sailing upwind is good, and enables us to be competitive! »

Team Tilt’s 49er finishes 41st out of 58 boats. « We could have done a better result », adds Lucien Cujean. « We reached several marks in the Top 5 and Top 10. We have to be more consistent to improve our final result. We had a good fight at the World Cup, but we need more time on the water in order to improve our downwind speed. We will then target a Top 30 ! »

Final results of the World Cup

The team left Miami for Clearwater (Florida), to take part in the third competition of the year, the North American Championship. « Our objectives are the same as in Miami ; we will have four days to train before the three days regatta on this new course », tells Schneiter. « It’s a very good opportunity for us to practice for the 2016 World Championship, that will take place in Clearwater at the same time of the year. »