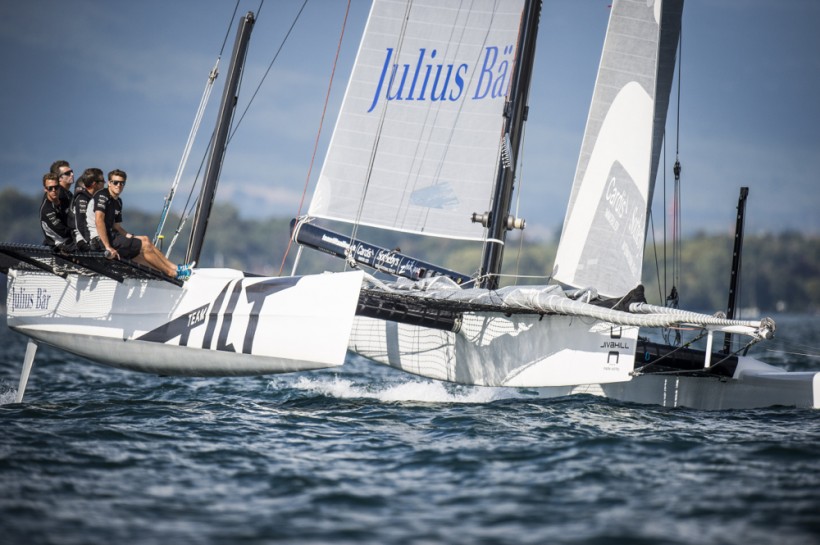 Sixth place at the 2014 Vulcain Trophy

Team Tilt went one better than last year’s seventh place finishing the 2014 Vulcain Trophy season in sixth place overall. The young team started the season on excellent form, very quickly achieving their goal of rattling the old guard by posting an overall event win and a podium finish in the first half of the summer. “The standard of the fleet increases every year,” explained co-skipper Sebastien Schneiter, “Which means the gap between the top boats and the second tier boats gets smaller and smaller making it more competitive. “We still have a lot more work to do to reach the level of the professional teams ahead of us, but we are on the right track,” he added.

Tactician and sports director, Tanguy Cariou, looks back at the last Grand Prix: “We had a lot of crew changes during the second half of the season and we didn’t have a strong enough core to compete like for like with the experienced teams on the circuit. Every sailor onboard needs to improve.” The team has confirmed its entry in the 2015 Vulcain Trophy. “We haven’t yet defined the crew, but Team Tilt will be there, race ready!” said Sebastien.

The 49er duo gets down to business

Lucien Cujean and Sebastien Schneiter officially started their 49er Olympic campaign at the recent ISAF World Championships in Santander, Spain. They did not set themselves any targets in terms of results – the primary goal being to gain a maximum of experience – but were pleasantly surprised: “We posted some good results at the beginning of the event in the light airs,” said helmsman, Sebastien Schneiter. “But when the conditions increased we started to feel our lack of time in the boat.”

The Swiss duo finished 61st out of 80 in the end, a good first step, as Lucien Cujean explained: “Racing the elite competitors in Santander gave us a good feel for where we are at and what we need to do in the coming months to reach the top level.” After a summer spent training in Riva del Garda, Italy, and Weymouth, UK, the team is planning to set up in the South of France for the autumn phase. “We are going to find training partners of our level,” said Schneiter. “Lucien and I get on very well on the boat and with our coach Simon Hiscocks. We are really enjoying the 49er and learning it bit by bit!”

“I married Tilt when I married Alex, or the opposite!” joked Marie Schneiter, wife of the Team Tilt founder. “At the beginning, Alex’s project was just a passion and dreams. It has come a long way in the last few years and I support it as much as I can!” she said.

On the water, Marie has her hands full: “I passed my boat licence so that I can follow the sailors on the water, take them food and give them a tow. Team Tilt sails in front of where we live these days, but when Alex was doing his solo offshore campaigns, I followed him all over the world!” Ashore, she also supports them: “I feed them when they come in off the water starving – they are easy to please and they are always hungry! I also run errands for them from time to time when they need something at the last minute.”

The Schneiter family has grown from two children and three dogs to encompass Team Tilt as well in the last few years. “I love having a house full,” said Marie. “Sebastien Stephant, shore manager, stays with us when he is working with the team. I love the fact that all the team meetings happen at the house, it means I can stay fully up to date with the project!” Marie brings a feminine and caring touch to the daily lives of the team which otherwise revolves around training, sailing and debriefs – it is very much appreciated!

Several times a year, the Team Tilt sailors share their passion with their team partners. We joined Julius Baer during their sponsor sailing day on the Decision 35.

Please click on the image above or on the following link to watch the film: youtu.be/7wDkVEe0xdk

Team Tilt’s remarkable results during the first edition of the Youth America’s Cup in 2013 have secured Swiss Sailing’s support for the 2017 event. The federation recognises the importance of having a Swiss team at the next edition as Swiss Sailing president, Vincent Hagin, explains: “We support this campaign as it is an ideal platform for sailors that strive to become professionals outside of the Olympic circuit.

Team principal, Alex Schneiter, was delighted: “It is very good news and proof that our project is recognised at the highest level, by our federation. We have now been officially selected to represent Switzerland with pride at the next edition of the Youth America’s Cup and we will be focussing on putting in place a performance structure in order to be ready for 2017.”

The winners will be announced on the 22 November 2014 at the fourth edition of the Swiss Sailing Awards ceremony in Ittingen. For more information, please go to: www.swiss-sailing.ch/fr/actuel/sui-sailing-awards-2014/

It is a shame there is not a category for acrobatics: Team Tilt would have been nominated for this stunt at the Open Nationale Suisse on the Decision 35! Click here to watch: http://youtu.be/gfbi4M80Bdg