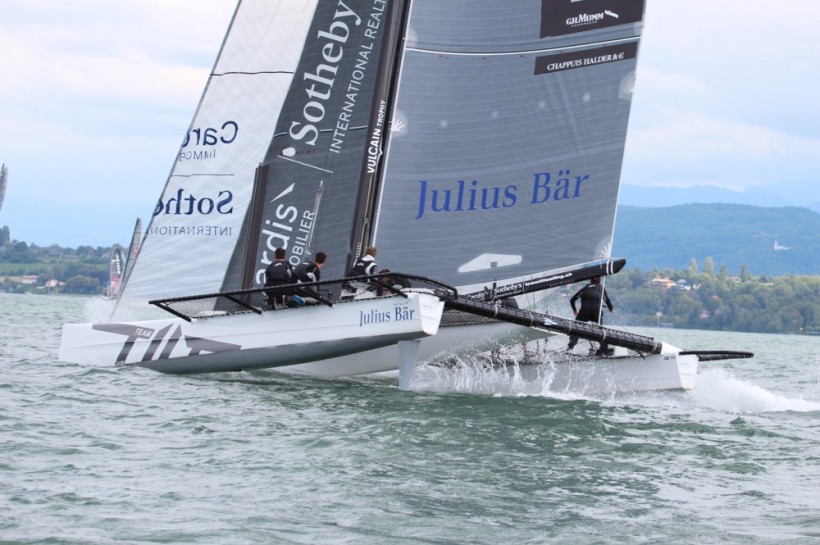 Team Tilt lined up with 10 Decision 35 multihulls last weekend on the Club Nautique de Versoix start line for the opening regatta of the second half of the Vulcain Trophy championship season. With a new crew configuration, the young team was very happy to post a 6th place overall after a challenging two-day event.

“After an intense week of training, we were confident going into the event,” said Sebastien Schneiter who has taken over for Lucien Cujean on the Decision 35 helm. “But training is always easier than racing and despite some good starts and decent tactics our performance wasn’t the greatest. Having made quite a few crew changes for the second half of the season, we certainly need to improve our onboard communication. It is a bit like the beginning of the year all over again – we all need to find our place on the team.”

Sunday morning, Team Tilt started strong, winning the first race of the day against elite competition: “We expected better of ourselves in general, but having said that, we are quite happy with the way the weekend went. Despite losing a crewmember over the side on Sunday and narrowly avoiding a capsize, we managed to put some points between us and the chasing group and are sitting close to the leading teams on the leaderboard!”

Alinghi won the Open Nationale Suisse, ahead of Mobimo and Zen Too.

With a good week of training behind them, Team Tilt is ready for the Grand Prix Grange & Cie this coming weekend (6-7 September).