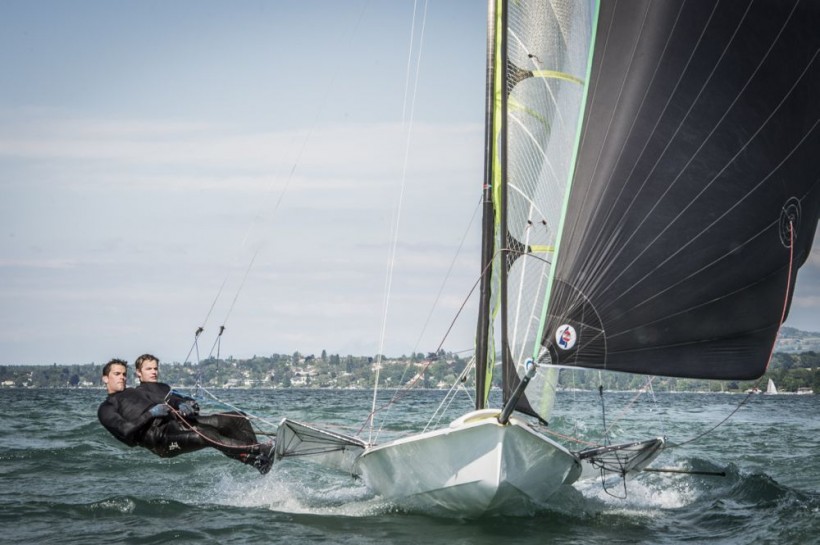 The Team Tilt 49er duo of Lucien Cujean and Sebastien Schneiter have welcomed an opportunity to head to Spain for the ISAF World Championships in September – the pair may not have been sailing the 49er for long, but they are happy to be joining the Casas/Mettraux duo in Team Tilt colours. “It was not our priority this year, but it will be a great opportunity to measure ourselves at the highest level,” said Cujean. The team only started sailing the 49er this year and has spent the first phase of the learning process focussed on boat handling. “Competing in Santander will allow us to see whether the summer’s training has paid off.”

Sebastien and Lucien spent 23 days training in Riva, followed by 22 days in Weymouth over the summer months. “We have discovered that we can spend 24 hours a day together and still remain keen! With two sessions of two to three hours a day, that is good news!” The young men from Geneva are being coached by Simon Hiscocks and were training with the Hunter brothers, the Scottish team that won the UK Championships in Poole. Team Tilt finished fourth overall – a good result for their first competition. “We even won the first leg!” said Cujean.

In Santander, the objectives are very different: “We don’t have aspirations of ranking overall, but will hope to have a few good legs from time to time. We are used to racing at the front of the fleet, especially with the Decision 35, but this time round will have to get used to the tail end of the peloton! We are completely fine with that though – our sites are set on the 2020 Olympic Games and that is still a long time away. We have time to train but it is very good to start early.”

The team will set off for Spain on the 7 September immediately after the close of the Decision 35 regatta, Grand Prix Grange & Cie. “We have had some good training this summer, the team has been very available due to the school holidays. The young are always motivated – it is great!” said Cujean. Sebastien Schneiter will replace Lucien Cujean on the Decision 35 helm for the second half of the Decision 35 season that kicks off in Versoix on the 30 August; he last helmed the multihull at the Geneva-Rolle-Geneva and the Bol d’Or in June.

For more information on Team Tilt in Santander, please go to: www.santander2014.com